I found a website that can draw a circle centred on a given location - 200 miles from Old trafford covers almost the whole of England.

The only places not within 200 miles are the very south east, south west and parts of the Isle of Wight.

Just a reminder, we are looking for a stadium, not a city

St Mary's is too close to Manchester.

I'm pretty confident one of the two towns I guessed are right; the other grounds are way too small (Torquay, Dover, Margate).

I don't remember this happening; so I assume it was a while ago. So for Brighton it would have to be the Goldstone ground. Plymouth's ground is *loads CM to check*: Home Park.
Top

This note from the first leg in France, taken from www.mufcinfo.com

While I was looking up the details I found out that they have played home matches at Maine Road, Anfield, Goodison Park, Victoria Ground and Leeds Road, as well as on their three own grounds. through the years.
Top

I know he played for Scunny but I thought it was only a couple of games and he didn't play anywhere else?
Top 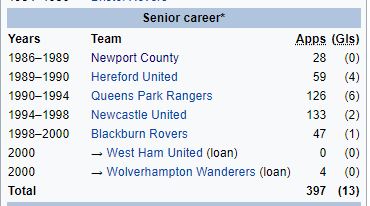 Darren "Rapunzel" Peacock! I know Bristol City/Rovers and Newcastle Utd players quite well (he played for Bristol Rovers in his youth, which is cut off by the screenshot), so I'm pretty good on the careers of players that have played for two of those clubs!
Top

Sticking to former Bristol Rovers players... this guy was a proper legend in the South West (but maybe not particularly well known outside of the area!). Good one for Steve Harle as he was on Tottenham's books without playing a first team game! 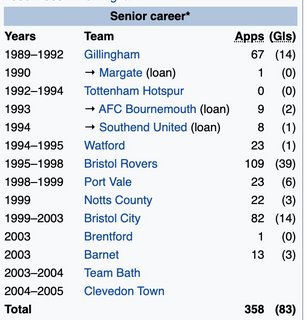 I make that one of our big money signings (think he was best part of £1m or something mad like that!) ahead of the start of the Premier League that never made it as some bloke called Edward Sheringham came in and took his spot.

SteveHarle wrote: ↑Sun Nov 21, 2021 1:52 pm I make that one of our big money signings (think he was best part of £1m or something mad like that!) ahead of the start of the Premier League that never made it as some bloke called Edward Sheringham came in and took his spot.

Think he’s managed most of these clubs too… Peter Beadle

I completely forgot I'd even asked this question

It sure was Peter. Jeremy Beadle's younger, not so funny brother.
Top

Commentator just mentioned that Alex Oxlade-Chamberlain was the youngest Englishman to score in the Champions League when he did so on his Champions League debut for Arsenal aged 18 - who has since surpassed him?

I suppose some might've come in between, but basically who holds the record now?

Nope he was 19 when he scored his first (FYI Oxlade-Chamberlain was 18 yrs 44 days) - not helped by the fact United were in Europa when he broke through the season before.
Top

was hoping it'd be harder as people might only think of English clubs! 17 yrs 289 days when he scored against City in the quarters last season.
Top

Rickie Lambert was mid 30's when he played for England wasn't he? Bagged at least 1 goal I think
Top

Think Defoe scored when he was getting on a bit too, didn't he get a recall when he had that purple patch for Sunderland?
Top
Post Reply
2777 posts