Good to know I am better in predicting American Football than Premier League football.
Top

Blockbuster deal with massive ramifications for years to come.

The QB they draft better be fucking good

Love the side affect of this:

My pal is a Dolphins fan so just been texting about this! They’ve now traded that 12th pick and their 2022 first-rounder for Eagles’ 6th pick.
Top

The Bengals will end up with the pick of every non-QB.
Top

First night of the draft last night. 49ers weren't fooling me with the Mac Jones talk - attempted to predict the top 12 (dunno why) with a couple of pals on WhatsApp, and I correctly sent Trey Lance to them at #3

Not keen on Giants trading down to #20 to take the best of the rest of the WRs (Kadarius Toney). I understand the move after the Eagles traded ahead of them to get the last of the best WRs, but I don't know why they were pursuing a WR so aggressively! Should've just taken the best DL (Micah Parsons I guess).

But we now have the Bears' 2022 first-round pick, so I look forward to rooting against them all season

Think the second round starts at midnight over here, I'll probably still be awake but don't know if I'll last until the 10th pick when Giants are next on the clock!
Top

I think the 49ers have motivated Jimmy G nicely with the Trey Lance pick.

We've already had 3 ruled out for the season and not even played a pre-season game yet. They need to hire the Brazilian physio's that Tim Vickery is always praising
Top

What a crazy crazy start to the season. 2 records broken/matched in one day yesterday

Stephon Gilmore leaves the Pats on a free.

Probably signs with Bucs in the morning.
Top

Probably signs with Bucs in the morning.

Not completely sure who can afford him, but someone's secondary is about to get a lot better! Bucs only have $3.3m cap space, so they'd surely have to get creative.
Top

Tbh he's still injured and has a history or being injured so I'm not sure how much of a pull he is. If he wants to win or be in with a chance of it 3.3m is more than enough
Top

Little surprise to see they have/had the second-most cap space in the league, my mercenary theory was correct

Forgot to mention that I went to Dolphins '@' Jags at Spurs' stadium the other week. I reckon that means I've seen Buccaneers, Dolphins, Giants, Jaguars, Panthers, Raiders, Saints, Seahawks and Washington now - 28% of the teams!

(I'd already seen Dolphins get whipped by the Saints a few years ago, but Jags were a new one)
Top

Buffalo Bills are my favorite. Soccer is undoubtfully the greatest sport but our love for American football is unmatchable. I am an artist and I have made many paintings of American football. I also have a spare hall in my house where I hang all these paintings.
Here: 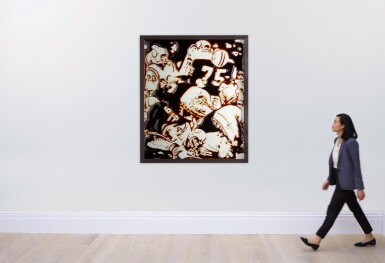 Return to “Other Sports”