Season 114 comes to an end, and you just couldn't script it.

With a game in hand, Chelsea had in their own hands, only to throw it away, meaning, the last game of the season, all Utd had to do was to win, and they did so, in crazy fashion, meaning the EPL returns to Old Trafford, with Southampton coming 3rd, a place where they'd been pretty much all season long. A new record was set last season in The FA Cup, well Chelsea extended that record as they made it 5 in a row, as they defeated AI in a close final. The League Cup, Utd were looking to equal the record of 6 successive wins, but they fell in harsh circumstances as Chelsea claimed the domestic cup double. As for the Champions League, well it has to be said, this was the Saint's saving grace after a superb victory over Utd

A quick recap of Preseason as we're about to kick off season 115. Pepe stepped down as Germany manager after 10 years, and you've gotta give him credit where it's due, he signs off shortly after winning the Euros, and that of course, is added to the World Cup he won 2 years, so what better way to finally step away. Ian was a shock exit at the Euro after a Quarter Finals loss to AI England, a result that cost him his job, so the ironic thing is, as we're about to start the new domestic season, not one of us have a national job

As far as the domestic preparations go, its been a busy summer, with plenty of ins/outs all over the shop. Utd have tightened up their defence, as have Chelsea who did a trade with the Saints, whilst new faces have arrived at St Marys. All eyes are on season 115 as we prepare to launch after tonights 3 and a half hour session. Can Pep's Saints finally mount a title challenge? Can Ian's Utd retain the title? Can Chelsea claim their first Champions League? Will the new arrivals at St Marys settle in with their setup? Can Zlatan regen fire Utd if he get to be number 1? Can the FA Cup remain at Stamford Bridge to extend the current record already set? - time will tell

On the link below, you'll find a download to the save, if you wanna have a gander, and see what 114 completed seasons gives you, in terms of records etc... note: its runs off 3.9.68, Tapani 2.19, but don't think you'll need the latter, as should work, but please try at your own risk

And so, season 115 comes to an end. And its fair to say, the title was pretty much handed to Man Utd. Having lead virtually all season long, the devils retained the elite title, to make it 10 titles in the last 12 years. Ian will be delighted thats for sure

Meanwhile, the record extends in the F.A Cup, as my Chelsea made it a 6th straight victory, beating one of my rivals (Pepe) at the last hurdle. It's gonna be a real tough feat to beat, with the only other record out there like this, is the same number of league cup victories.

As for the League Cup, it was pretty much the same outcome, as Chelsea retained it, with a hard earned win over Southampton, but a much closer match

Then there's the Champions League - well that concluded a cup treble for me and the boys of Chelsea, but more so, the last main trophy to have eluded me as the Blues Boss, was no more. In a tough final, despite the scoreline being very flattering

After a little break, we're off and running into Season 116. With preseason out the way, we've all made several tweaks to our squad. The International front, saw Ian's Germany, bow out of the Confederations Cup to his prior nation - Spain - at the Semi Final stage. The Shield went to Chelsea, who also won the Super Cup, and their first Inter-Continental trophy, although its all about the EPL, Domestic Cups and of course, the Champions League

Firing through season 116. The World Club Club has taken place (2 yearly) and although we at Chelsea won it, in the past, its been known to derail the title challenge, with games in hand left right and center. Utd lead the way, but if the Blues can win their games in hand, will take top spot. A recent 3-3 draw with Southampton, was matched with a shock Utd draw against AI. But as we hit the new year, the key matches are surely to be the return games against one another. It could and should be a Southampton/Man Utd League Cup final, with the Saints having knocked out the last 2 years winners ' Chelsea' at the first hurdle (3rd Round) we're off and running with the FA Cup, all safely through to the 4th round with Chelsea looking for a record 7th cup triumph on the spin. Pepe endured a horrible league session this evening, dropping points left, right and center, so whilst he may concede the title race for yet another season, he'll be in desperate need of at least 2 cups. The Champions League is as expected, with all of us easily plodding along in phase 2, with the Semi finals always being the key, as to who will land who, given we're expected to avoid each other at the quarters.
Not much action on the transfer front, but in fairness, key purchases were made prior, and ironically, it was my former club (AI Spurs) who spent a fortune. Expected to make the top 4, they're struggling, but always play a key part in the title, having beaten Utd and Saints already once this season.
If a gum boil could boil oil, how much oil could a gum boil, boil, if a gum boil could boil oil ?
Top

3 Man Network Game - Update
And so Season 116 concludes. Let's start with me - a horrid season from the off. The Saints finish the season with nothing at all, yet again, and finishing 3rd, means they will have to endure a couple of qualifiers next season.

Ian's Man Utd take the League Cup, with an easy victory against the Saints. The FA Cup remained at Stamford Bridge for a 7th successive time, after the 11 final appearance in a row, ended in victory for Chelsea as they defeated Man Utd to extend the record.

The Champions League saw something we haven't seen in 8 years - an AI team in the final, it was Spurs, who to be fair, had spent big at the start of the season, but the trophy remained at Chelsea as they came through a hard earned victory despite a flattering scoreline

The EPL was a 2 horse race from start until the very very end, and it was Man Utd who came good, winning it on the last game of the season as Chelsea were held, and surrendered the chance to claim the title, something that should've been theres, but Utd stood firm to clinch their 11th title in the last 13 seasons
Top

As we firmly kick into season 117, its all to play for

i normally have free time

i normally have free time

After a short break due to family reasons, season 117 is over.

The League Cup ended up at Old Trafford after The Red Devils defeated Chelsea in the final.
In a role reversal, The FA Cup arrived at Stamford Bridge after a victory over Man Utd.
The Red Devils also took the honours in the Champions League, again defeating Chelsea

All ploughing along on the international front.

Mikey is occupying the Germany Hotseat, I'm holding the Holland position and Ian is currently eating Italy out of Pizzas!

Rumors are swirling of possible managerial changes amongst the human players but we await confirmation.
Top

Decent write up Pepe - my perspective:

Utd are so hard to defeat, their Strikers are insane, so have that depth to rotate, then of course, theres the rest of the setup. As Chelsea, Ive found it so tough to beat them. Southampton on the other hand, I actually feel for Pepe, it was yet another horrid season, which fell apart from the off, but, slowly and surely, he can break back into that top 2, and maybe get a trophy in season 118. For me, an 8th FA Cup victory was nice, quite a record, and one thats gonna take some beating, on the subject of records, Man Utd, currently sit on 4 EPL titles, with the record being 5, set by my 'then' Spurs, can it be matched? you gotta make them favorites to do it. There was some speculation, I might leave the Bridge, had I not continued the FA Cup dominance, well, that ship is still going strong, highly unlikely - will Pepe fancy a change? part of me thinks, Yes, but then another part of me, he'll wanna bounce the Saints back, so Im 50/50 on that. Ian leaving Utd, not with a 5th title in sight, and as I said, they'll be tough to beat, but, the coming season will see Utd in the World Club Cup, history shows, this proves to be a real pain in that clubs title challenge - we shall see
If a gum boil could boil oil, how much oil could a gum boil, boil, if a gum boil could boil oil ?
Top

After 4 hours on this game yesterday, we sailed through pre-season and the international bits and pieces

As season 118 comes to an end, it was a familiar scene all over the shop. Poor Pepe and his beloved Southampton once again ended up with nothing, and having to go through the CL qualifiers next season once again. But in fairness, his squad is picking up. There was no 9th FA Cup Victory for Chelsea as it was Man Utd who take it, although it took pens against AI to clinch it. That can be added to the League Cup which Utd claimed. Then there was the EPL, and credit to the Champions, who make a record equaling 5th on the bounce, as Utd retain it, but just look how they did that. Then there was Champions League, and who took it... of course.... Man Utd, completing the Quad, so credit where it is due for Ian

Onto Euro 2132, where we all have a shot, my Germany, with Pepe Page's Holland and Ian Ian's Italy 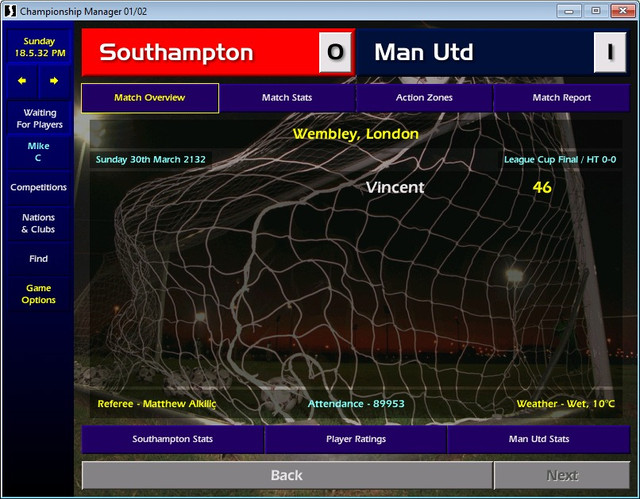 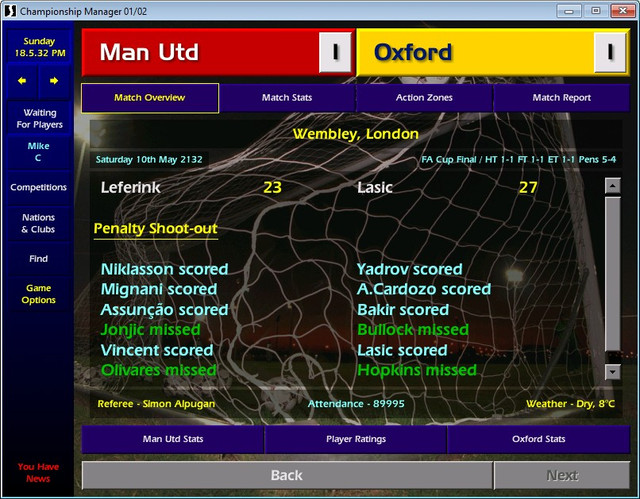 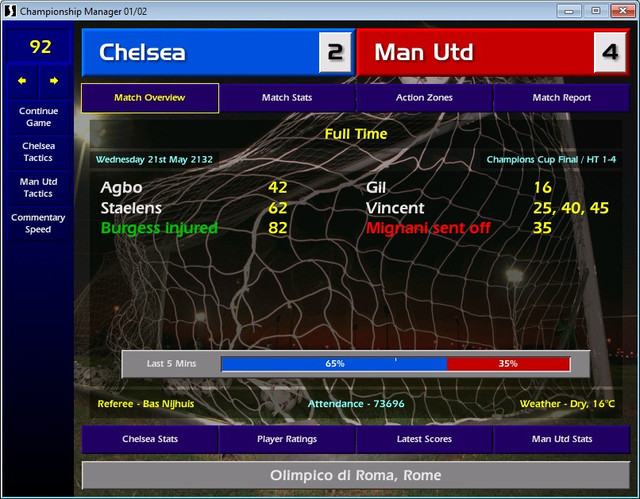 And a YT Video to summarise last season

And so season 119 comes to an end. It wasn't to be a 6th straight EPL title for Man Utd, as most of the season was lead by Southampton, but it was Chelsea who held on strong, despite several blips, as they claimed the title, Meanwhile the Saints had to extend their season, having a game in hand, by a week, and how crucial that proved to be, as they slipped up, meaning they finish out the top 2 for the 11th season straight.

The Saints were underdogs at the start of the season, but they proved their critics wrong, as they claimed both domestic cups in style. And then there was the Champions League - can you guess, yep, it was Southampton once again, their best season in a long long time, meaning, after last seasons Quad, Man Utd had a trophyless season, which is very very very rare.


As far as the International scene is concerned, whilst Mikey is not with any nation, my Holland and Ian's Italy, both look good for a World Cup 2134 place
Top

A glance at this game using YT -