As season 121 kicks off, lets have a glance at a couple of screenshots of a couple of early performers, at each of our teams

I love this
"There is a tide in the affairs of men, which, taken at the flood, leads on to fortune"
Top

Breaking News:
We nearly lost this save, after a recent PC disaster, it looked dead and buried, however, I ha a copy of the save on my Laptop, for recording purposes, it does mean, we're gonna have to go back about 6 months, so we lost the 2nd part of the last season, which will bring us back into season 120. Could've been a lot worse, thats for sure

Does make a mockery of how Season 121 actually finished, with Utd winning the domestic treble and Chelsea the Champs League, but... I guess, these things happen. So we'll be back on this soon, built up another PC, got my Hamachi and stuff all sorted and off and running
Find me on YouTube and enjoy CM related content - https://www.youtube.com/channel/UCmoWKH ... wcF_cLC70w
Top

So we kicked off a couple of sessions over the weekend, and we're back on track, as we're forced to replay the 2nd half of season 121 again, I feel we've all finally accepted that. To recap, Utd won the domestic treble and Chelsea won the Champs League, will that happen again, or can we alter the endings this time around. I'd be happy with the same outcome tbh, and am sure Ian will, not sure Pepe will though

Below is the link to the game, if anyone wants a gander

And so, (finally) season 122 comes to an end. Its been a while since the last proper update, due to having to replay the back end of season 121 again, due to a corrupt PC, so losing only 5 months was a result, and ironically. The same teams won 3 of the 4 major competitions, it was only the League Cup that went against how it was played initially.... Anyway...

Southampton took the League Cup, edging the final against a big rival, Pep will be happy never the less. Then came the FA Cup, where it was the Saints who celebrated again, this time, battering our bogey AI team, at the final hurdle. The Domestic cup double will only be a consolation for Southampton as they endured their worse league season in 26 years, finishing 4th.

With no World Club Curse, Chelsea held firm, to win their games in hands, and re-claim the EPL with a very nervy finish to the domestic season. Meanwhile, it was another mouth-watering clash in the Champions League Final, where bragging rights went to... Chelsea, in what turned out to be a 1 sided final

Onto Euro 2136, where Ian has Italy, and Pepe has Spain, both of which will be fancied to do well. And of course, preparations for the new league season 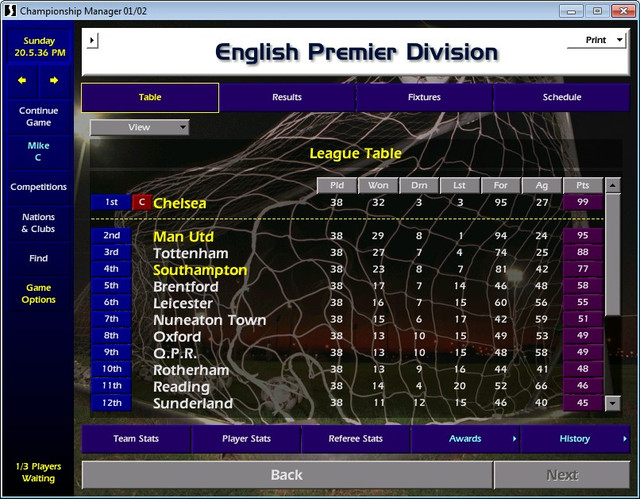 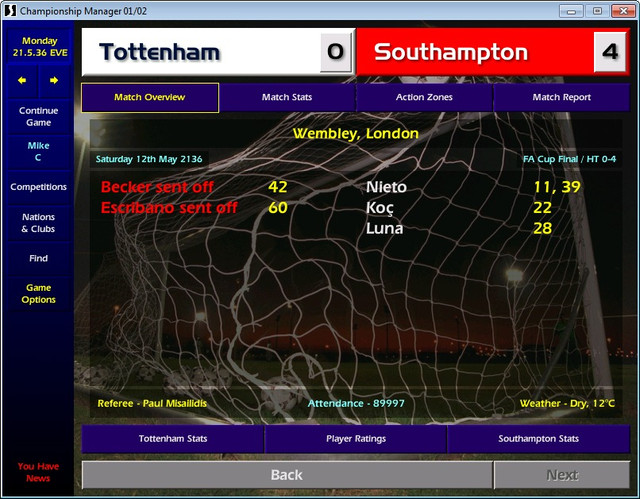 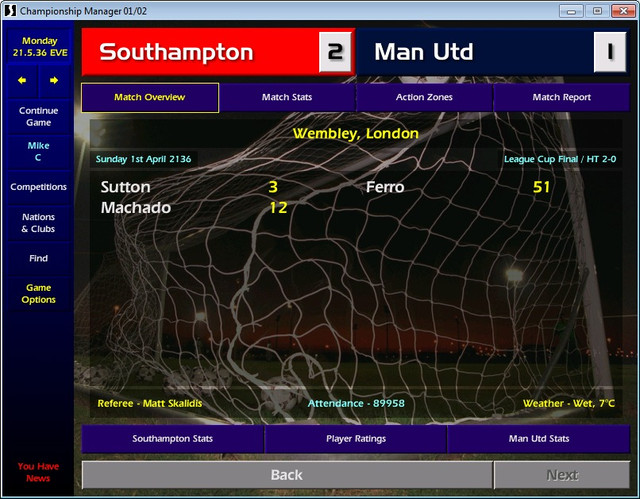 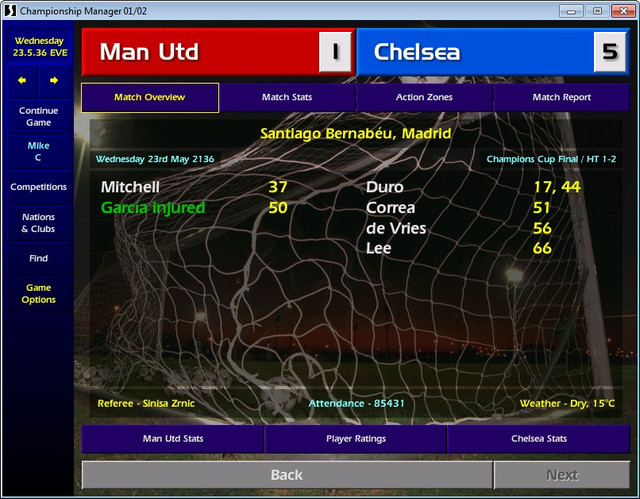 And as per our new ruling at the end of each season, here is a copy of the save. You'll need to extract it (WinRar) or an alternative should work. Place it into your CM folder. Note - won't work on a Saturn/Nicks Patcher install

Season 123 comes to an end - see for yourself

As this record busting network game, nears the 9th year anniversary, we come to the end of season 124, and as per usual, what a bloody ending it was. A rare trophyless season for Man Utd, but the gaffer will be gutted, as the new EPL Champions - Chelsea, had to have the season extended by 2 day, to play a game in hand, and crucial it was, as they leapfrogged to the top of the table after the match. The League Cup was also claimed by Chelsea with an epic 7 goal thriller of a win over Man Utd. Meanwhile, AI Spurs, retained the FA Cup, as they defeated Chelsea. And finally, the Champions League, Southampton clawed back from a semi final first leg 3-0 home defeat to secure a 5-1 away win in the 2nd against Man Utd, to then sail past Spurs at the final hurdle.
Find me on YouTube and enjoy CM related content - https://www.youtube.com/channel/UCmoWKH ... wcF_cLC70w
Top

Well done with that game

As Season 125 kicks in, we do see a change around in the international setup. With the World Cup out the way, Ian's current Champions - Italy bowed out at the Semi's to England, whilst Pep's Germany, also bounced out at the same stage, to eventual winners - Spain. With Ian taking bragging rights of 3rd place, it didnt change his perspective that he would leave the hot seat in Italy, and take over the newly vacant Brazil post. Meanwhile Pepe remains as Germany manager as Euro Qualifying looms, and after a few years out, I find myself back in the mix, taking over as Italy, albeit, with an aging squad.

Meanwhile, the domestic season is off and running, with a very familiar score line taking place, Chelsea 0-5 Man Utd - after this finished this at this stage last season, history repeated itself with the Champions being thrashed again, the only hope is that history can repeat itself come the end of the season, but they did kick off with a Chairty Sheild victory over AI bogey team - Spurs. Meanwhile Southampton are off and running with victories in the Super Cup and Inter-continental Cup, but fair to say, the Saints urgently need an EPL title
Find me on YouTube and enjoy CM related content - https://www.youtube.com/channel/UCmoWKH ... wcF_cLC70w
Top

Season 125 comes to an end, and I am speechless... after last seasons heroics, Chelsea looked in good form to retain the title, last game of the season, Home to already relegated York, we bottled it, lost, and Ian's Man Utd leapfrogged to claim the title

It was the same old story for Pepe and his beloved Southampton. Once again, finishing out the top 2, let alone at the top, but the FA Cup will be welcomed to the trophy cabinet after a 1 sided final against a rival. Another one sided final saw Chelsea retain the League Cup, and once again, was against an arch rival. Then there was the Champions League, everyones bogy team - Spurs made it to the final, with a frantic Semi aggregate 6-4 win over Chelsea, where they met Man Utd, who beat the Saints, with the AI Kings in control until a 15 min blitz saw Utd claim the elite cup in style
Find me on YouTube and enjoy CM related content - https://www.youtube.com/channel/UCmoWKH ... wcF_cLC70w
Top

Copy of the game, if anyone wants a gander

A very happy birthday to this save, which is 9 years old today
Find me on YouTube and enjoy CM related content - https://www.youtube.com/channel/UCmoWKH ... wcF_cLC70w
Top

For any fans of this save, as we work on a small session at present, heres a blast at the last 16 seasons in the 4 main competitions along with a cups and leagues tally 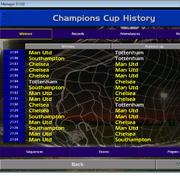 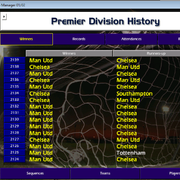 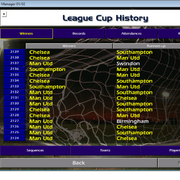 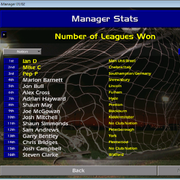 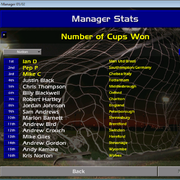 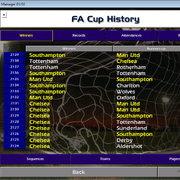 Little update for you all

Season 126 finally comes to an end. Whilst one thing or another has cropped up these past few weeks, we finally crossed over the finishing line moments ago, after an epic session this afternoon, which brings us nicely to the start of the Euro.

The title remains at Man Utd, having lead the table most the season, it was Chelsea who really threw it away after a horrid end of season bit of form, proved costly, as they only just scraped runners up spot. Southampton claimed the FA Cup as they edged AI in the final, whilst Man Utd claimed the League Cup in an 8 goal thriller against Chelsea. It was sheer revenge for Chelsea as they defeated Man Utd in the Champions League, to pretty much, save their season.

Rebuilding has already began across the board, with plenty of ins and out all over the shop. Euro 2140 is here, with my Italy and Pepe's Germany looking for glory, whilst Ian's Brazil have began World Cup qualification.
Find me on YouTube and enjoy CM related content - https://www.youtube.com/channel/UCmoWKH ... wcF_cLC70w
Top

A quick upload of the save