You are a general in the Roman Army with a great career ahead of you. The consuls of the Republic want to put you to the test first. You have to defeat the tribes in Italy and establish Rome as the regional power! They are ready to give you a few legions to do this task (Win Italian league with Roma, using only Italian players.)

The consuls are very pleased with what you've done, but they are worried because of the constant invasions of the Gauls. They want you to take your legions north and conquer the Gauls for good. We don't want them to remain a threat for centuries, do we? (Win French First Divison with only Italian players.) However, once you've conquered the Gauls, you have to stay and govern the province for one more year. If you are particularly efficient in establishing the Roman rule in France (win the CL in 2nd season), the consuls will reward you with a triumph in Rome (1000 points).

Excellent! While you were fighting the Gauls, rich Greek merchant cities became a pain in the arse so the consuls, delighted with your work so far, want you to deal with the Greeks. You’re allowed to recruit new troops in France for this task. (Win Greek First Division with Italian and French players only. ) Again, stay there for a year more to make sure they won’t rebel. (Stay at the club for another year, of course.)

“We have a problem with Carthage, general. The siege of Messana, by the joint forces of Carthage and Syracuse, was the act of war and we won’t tolerate it. We’re sending you to make the end of it…and not just the siege, mind you, we want you to destroy Carthage!" (Win African Nations Cup with any African nation.)

The trade routes of the Adriatic Sea had, prior to Roman dominance in Italy, been subject to the Tarentine fleet. But with the loss of independence of Tarentum, responsibility for securing the sea ways of the Adriatic now fell to Rome. The coast of Illyria was rife with pirates under the rule of King Agron, who had just died from the excesses of celebrating yet another successful raid. The rule over the pirates had now fallen to his widow Teuta. Defeat Queen Teuta (win Croatian First Division) and stay there for a year more, just like in the previous tasks. However, some of the locals have rebelled against the queen and they’re willing to join your army. (You can have up to 15 Croatian players in your team, but you also have to have at least 5 Italians. French and Greek players are also allowed.)

Upon your return from Illyria, the consuls have bad news. The remnants of Carthaginian army are still fighting us in Spain. The war have waged to and fro. The consuls want you to land a decisive blow with a compiled army from your journies. (Win Spanish First Division, using only Italian, French, Greek, and Croatian players. Again, stay for another year and attempt to win the CL.)

While you were in Spain, the Germans were massing at the Saône, preparing to invade Italy by crossing the Alps in two different places. The Teutones crossed the mountains in the west, the Cimbri did so in the east. You are sent there to stop them with your loyal army, including the fresh recruits from Spain. (Win German First Division using only Italian, French, Greek, Croatian, and Spanish players. Stay for another year.)

You’ve proven to be the best general in the Republic, but the consuls want you to complete one more mission. Take your forces and conquer England! (Win English Premier League, using Italian, French, Greek, Croatian, Spanish, and German players. Stay for another year.)

Proud, but tired, you have returned home to see young Octavian becoming a sole ruler of Rome. He grants your wish to retire, and you’re on your way to a nice villa you recently bought. Unfortunately, on the streets of Rome, one of the senators cuts your throat. He found out you were banging his wife every time you came back to Rome.

-use Sept ODB 2010 Update or the Christmas 2010 SIM Update
-load Italy, France, Greece, Croatia, Spain, Germany, and England
-your tactic must have at least 3 players at the back, and/or wingers somewhere
-every time you're moving to the next task, you have to resign from your previous club, and apply for vacancies in the required league
-when doing the Africa part, you are not allowed to manage a club and a nation at the same time
-nationalities work like in the Nationals Challenge; you use the first season at a club to get rid of the foreigners/non-eligible nations, and second season must be with all the allowed players
-second nationalities are allowed
-upon the start, use the savegame editor and set your CA/PA to 190/195
-changing your nationality is not allowed; HOWEVER, upon the start of the game, you can add yourself a second nationality
-once you've changed your CA/PA and added yourself a 2nd nationality, you're done with editor for good
-If you get a new job before Christmas, it counts as your first season. If you get it after Christmas, the next season counts as your first at the club
-once you've got a job in a country, you have to stick with that club, i.e. you're not allowed to move to another club in that country

3 point scoring years at each club except Roma:


You can choose to create the game yourself, or download a pre-loaded save here (this save will work on the v3.9.68 patch)
You do not have the required permissions to view the files attached to this post.
Top

Update: It's taken almost a year but the challenge is finally over and it may have been worth it as I think I've smashed a record score! 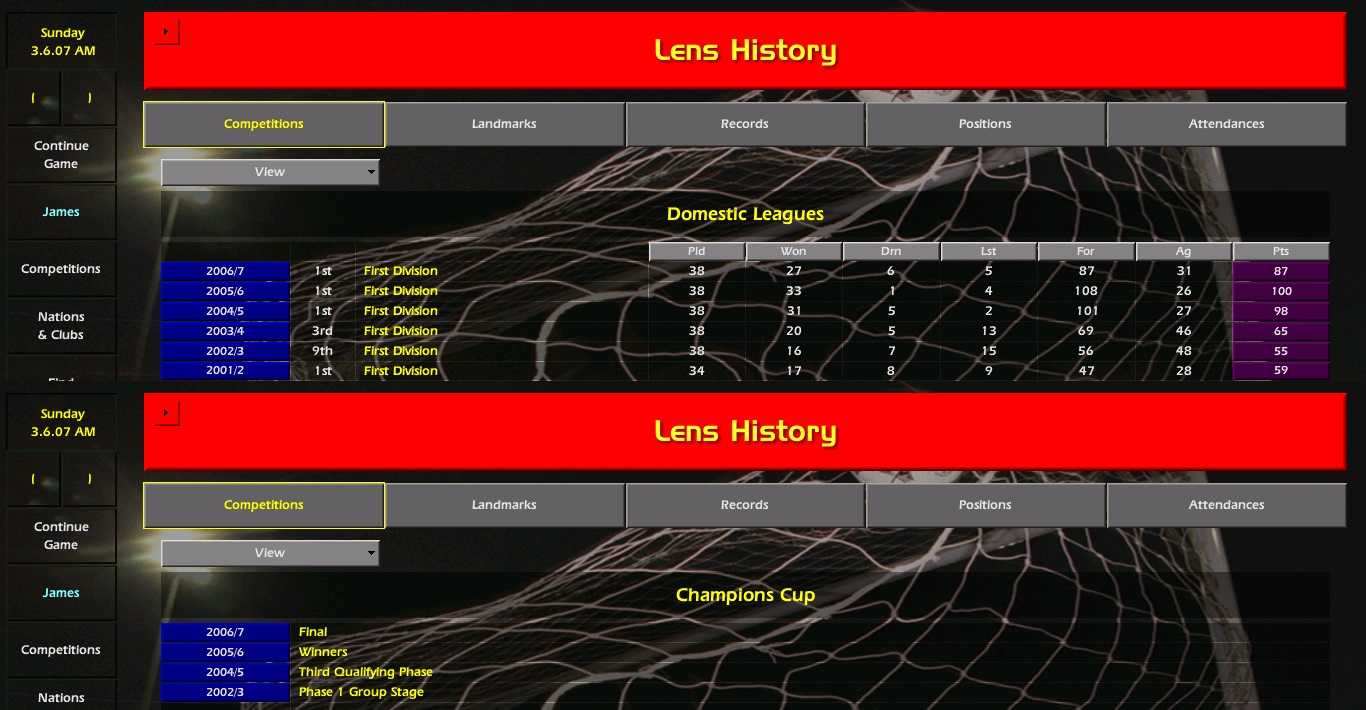 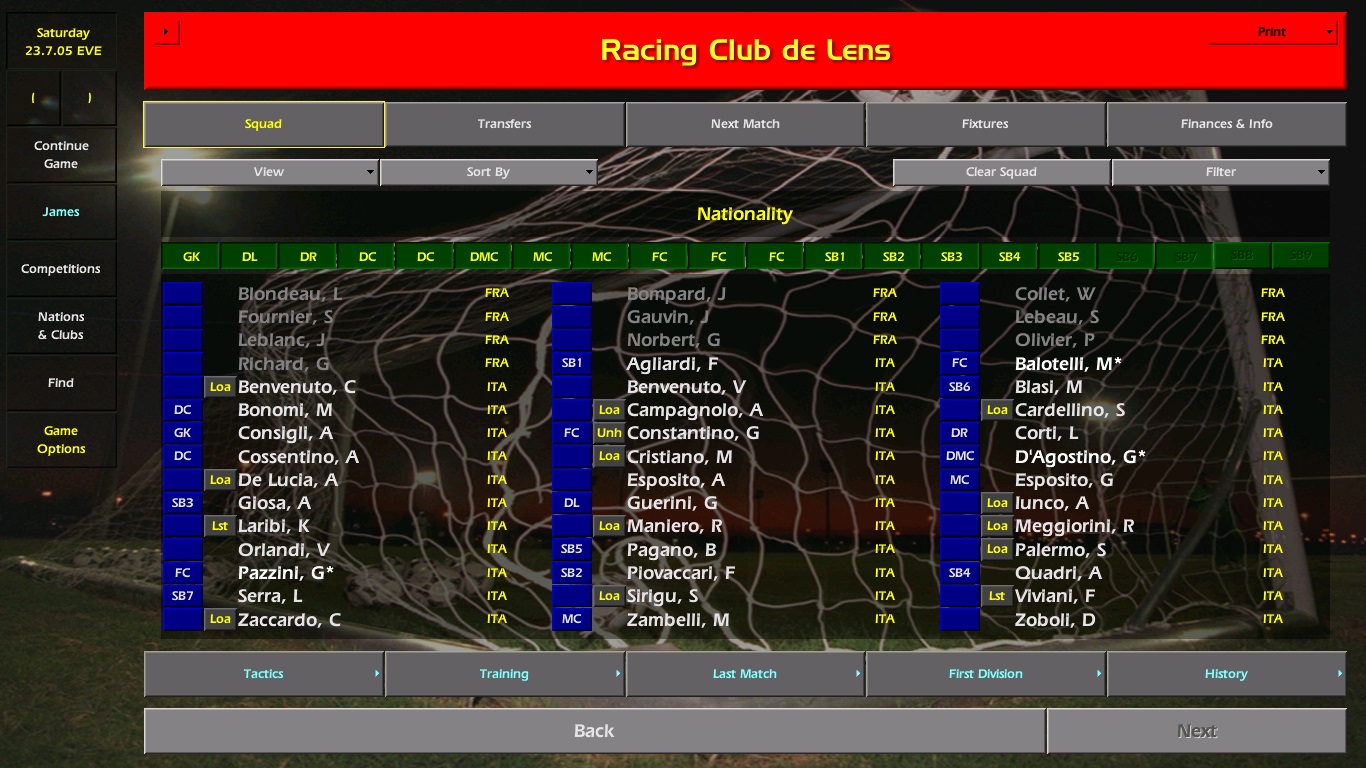 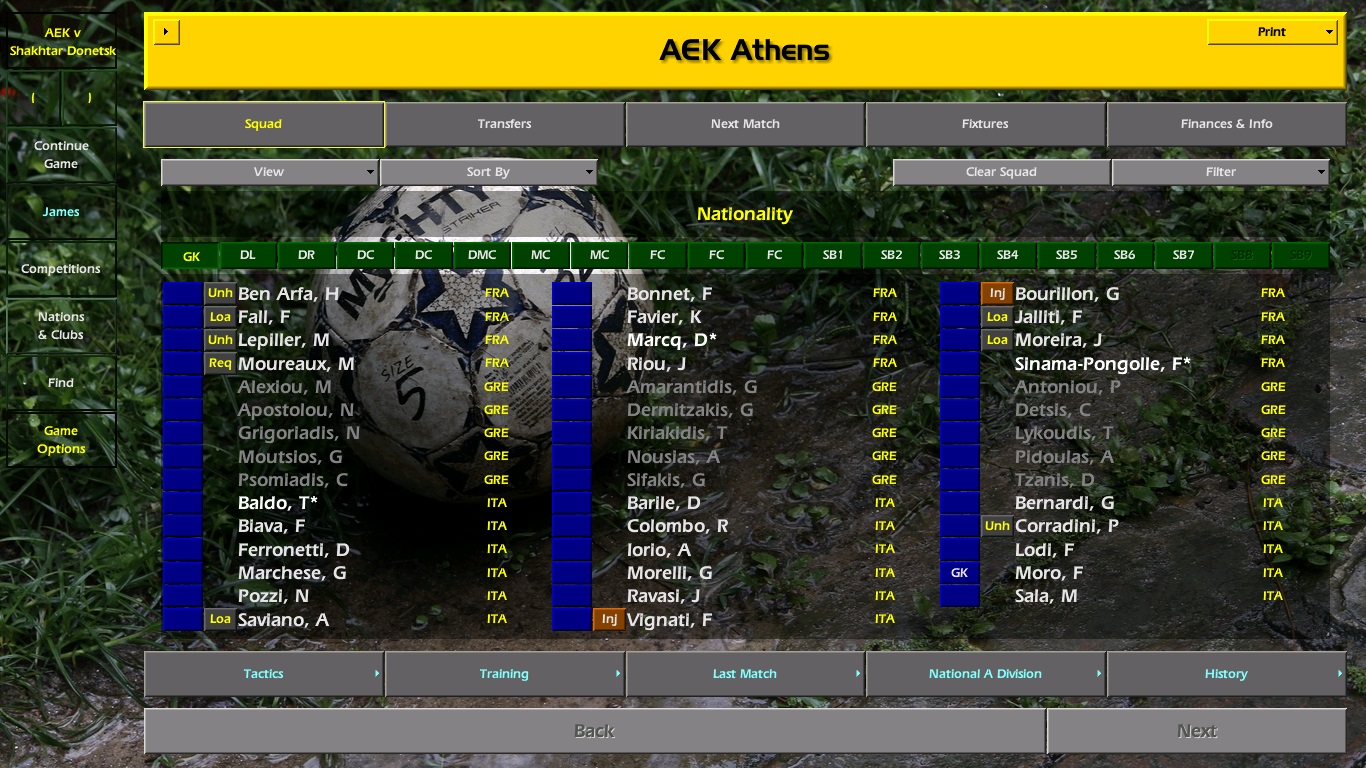 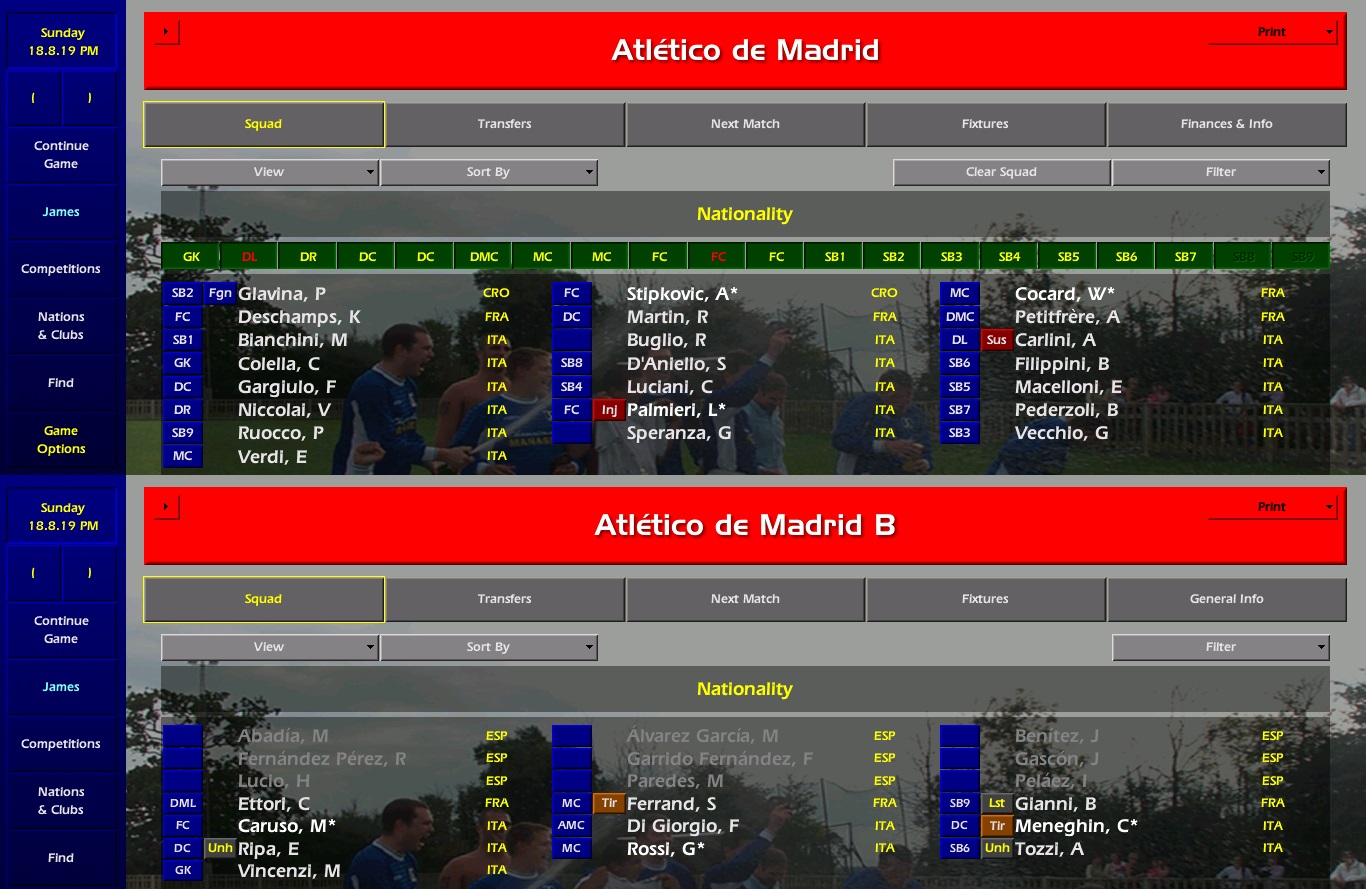 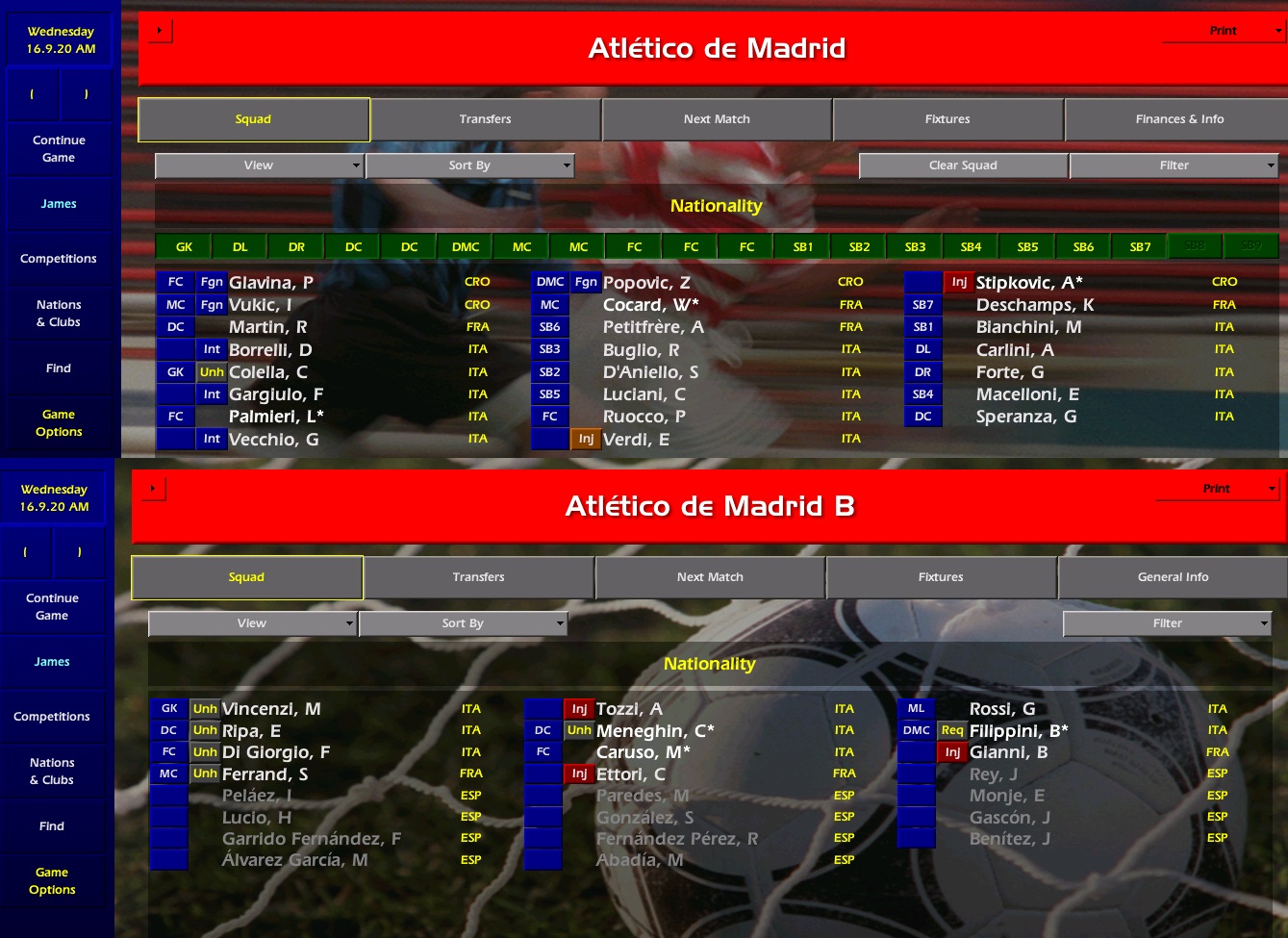 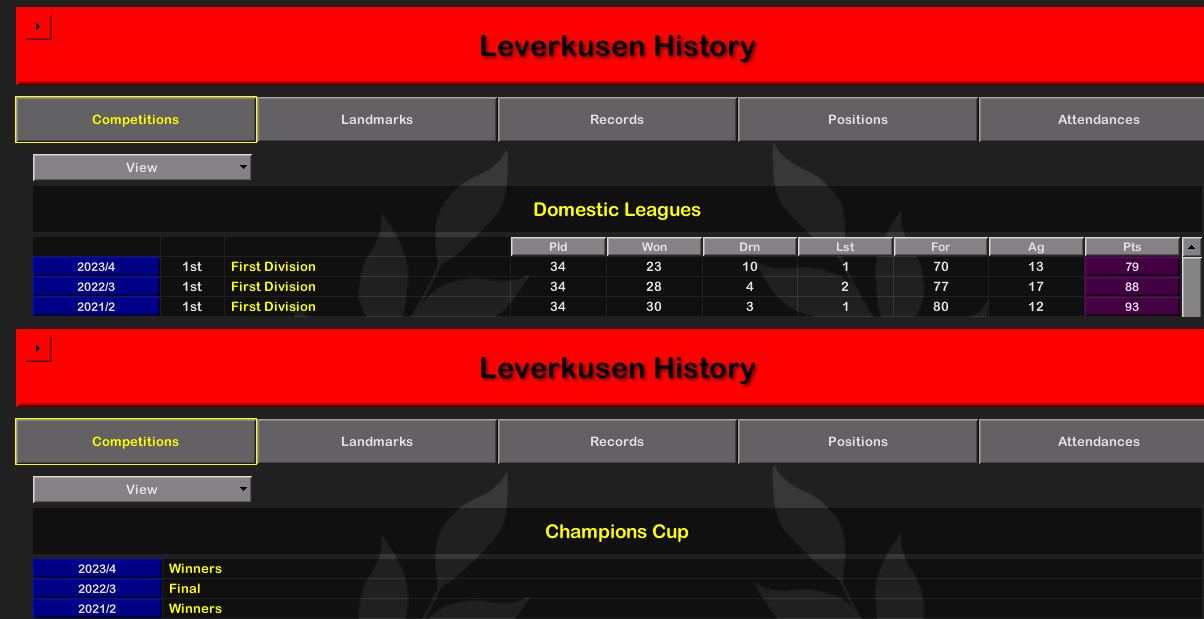 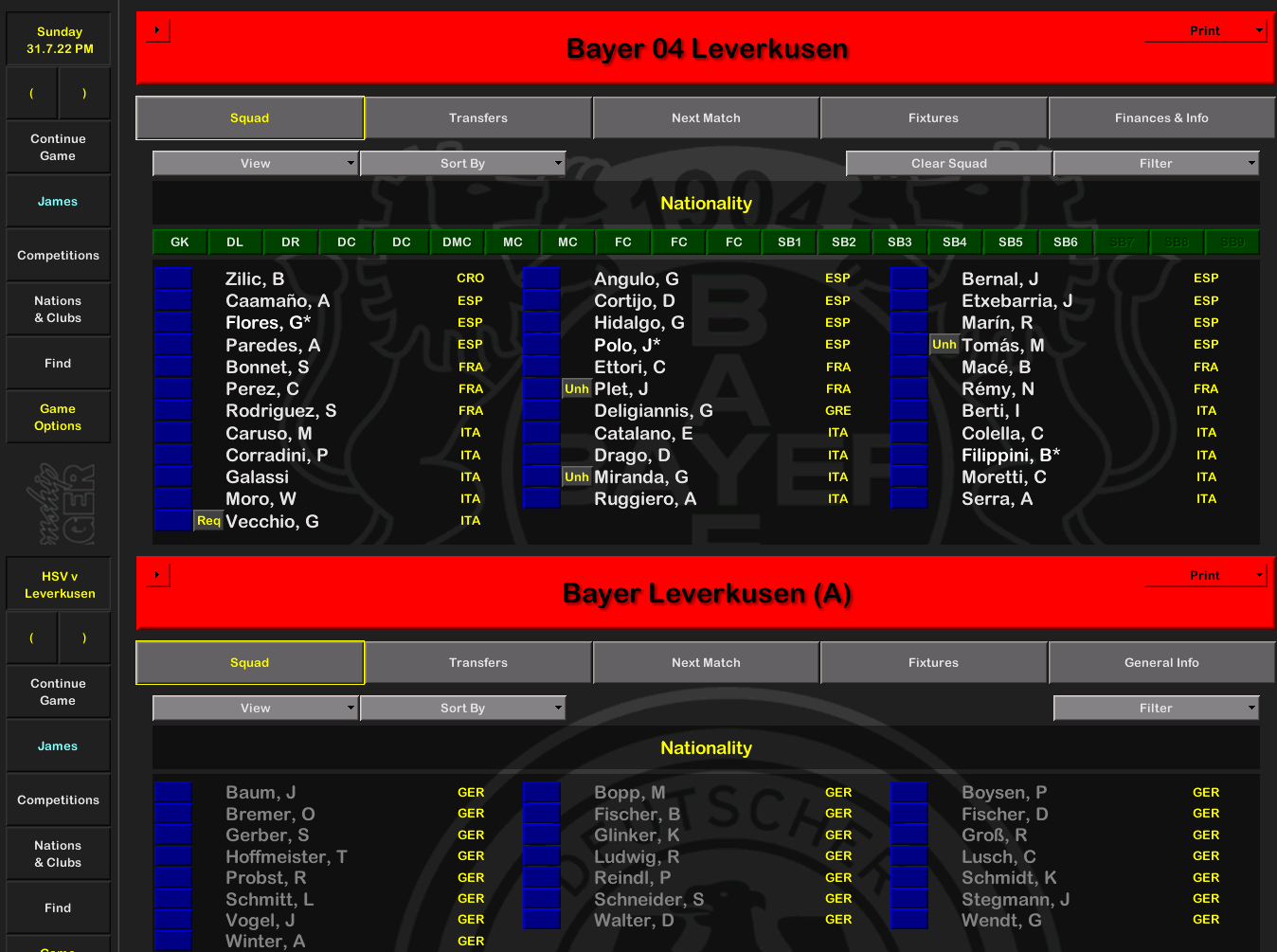 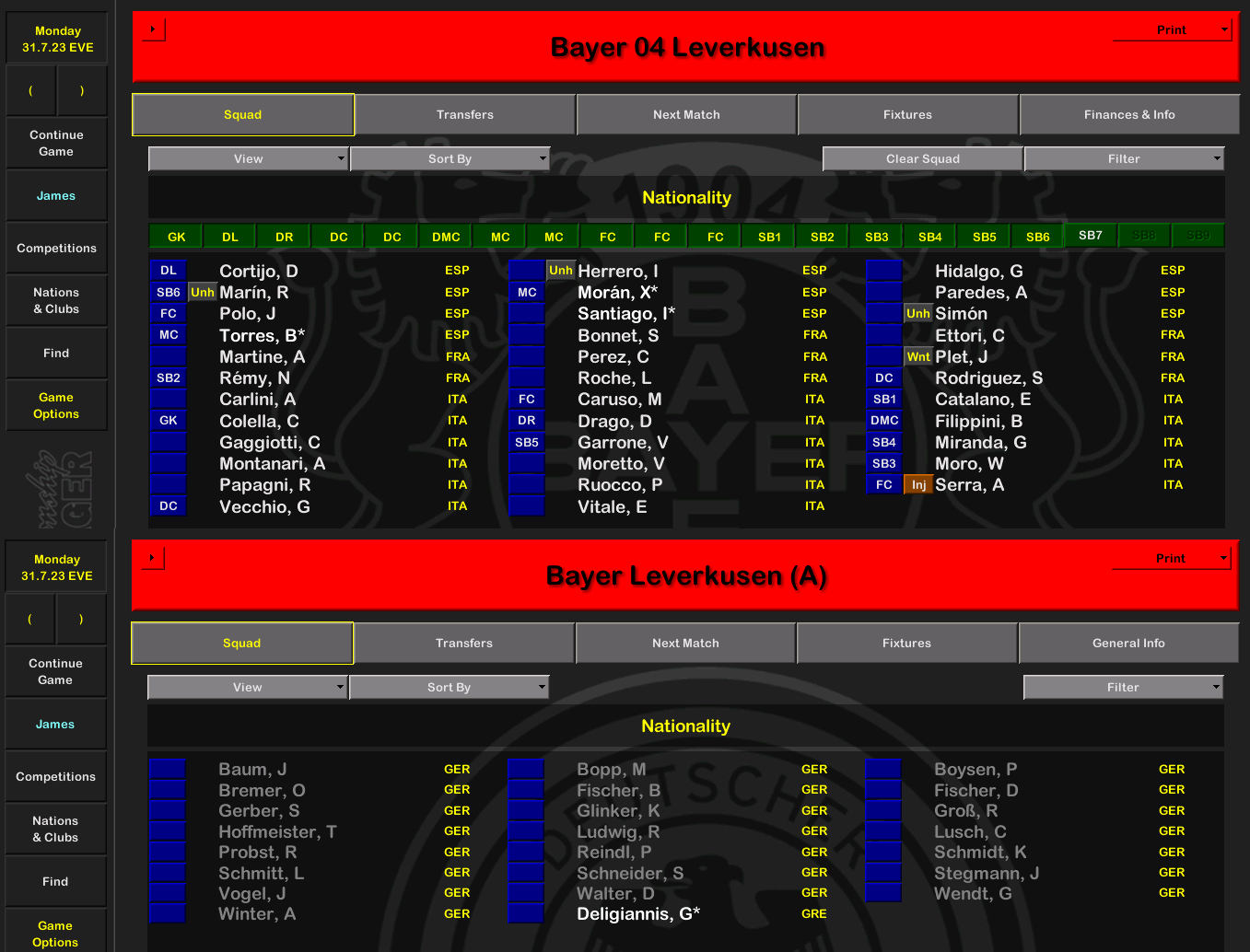 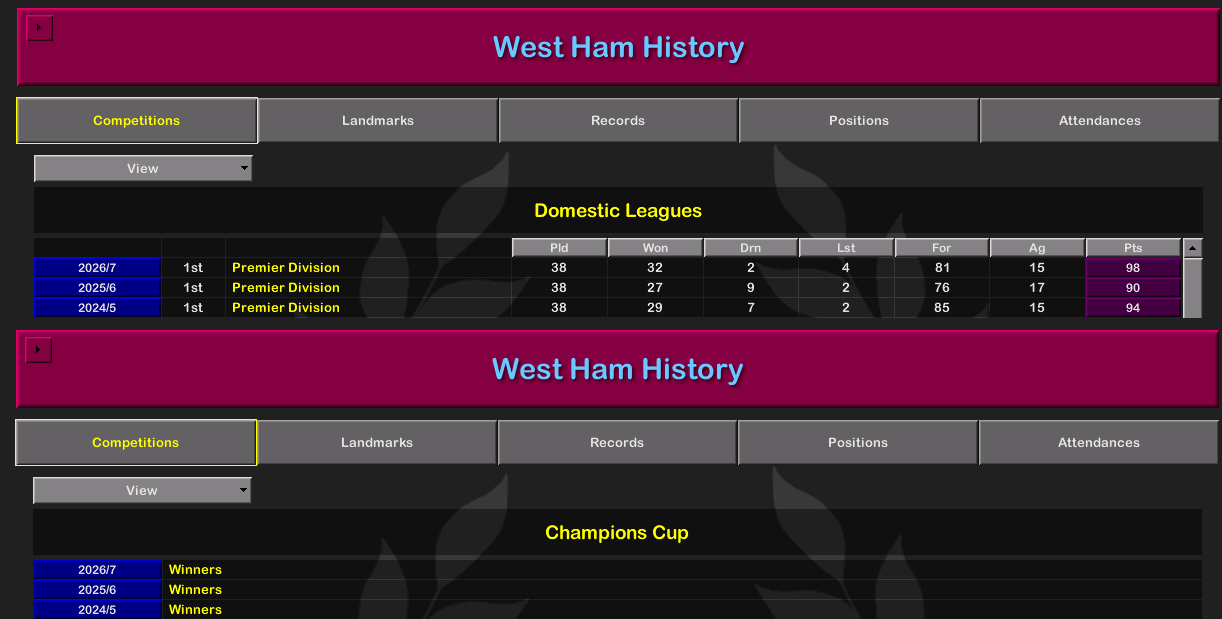 Outstanding stuff mate and congratulations on taking top spot for the challenge!
Top

Think I'll give this one a shot. Should be a lot of fun.

I thought that was probably the case. In any event its unlikely that I'd look to buy many players in season 3 as I would be jumping ship at the end of the season and why reduce the pool of players for my next team.
Top

I got answers to many of my challenge questions by investigating their topics at the old site.
Top 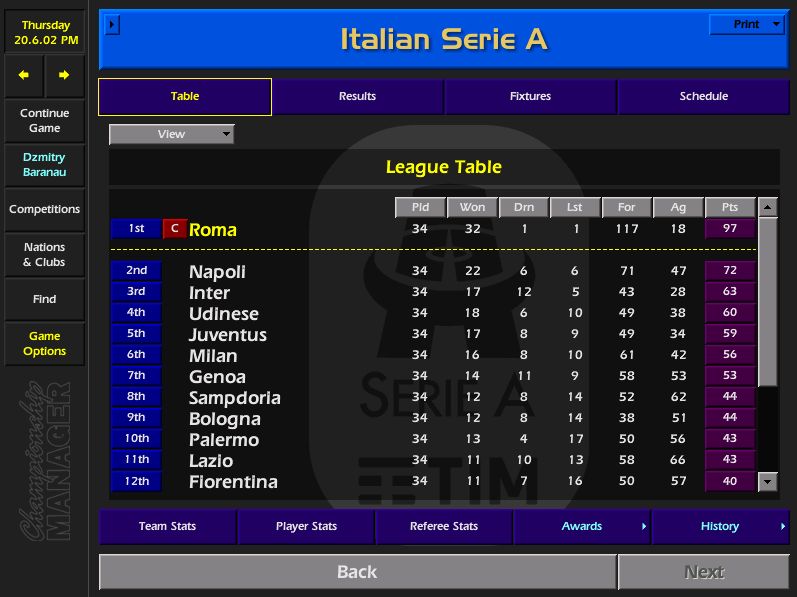 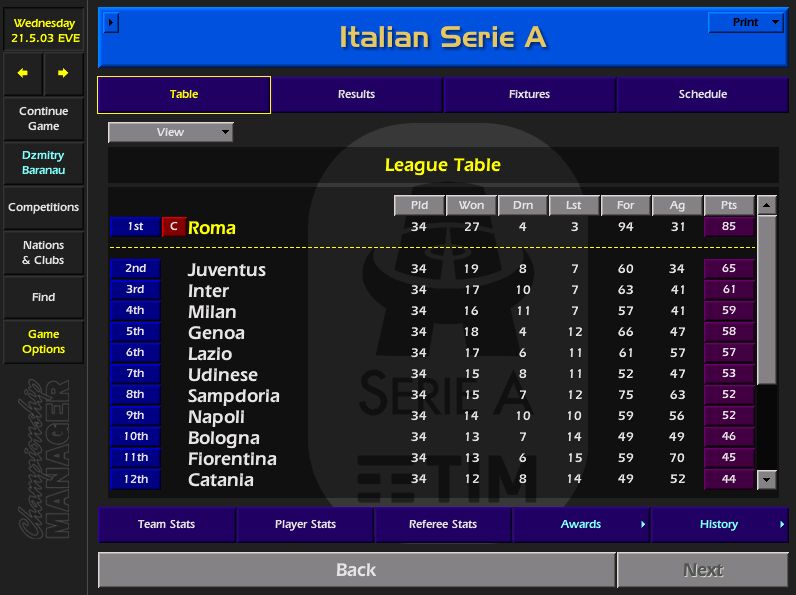 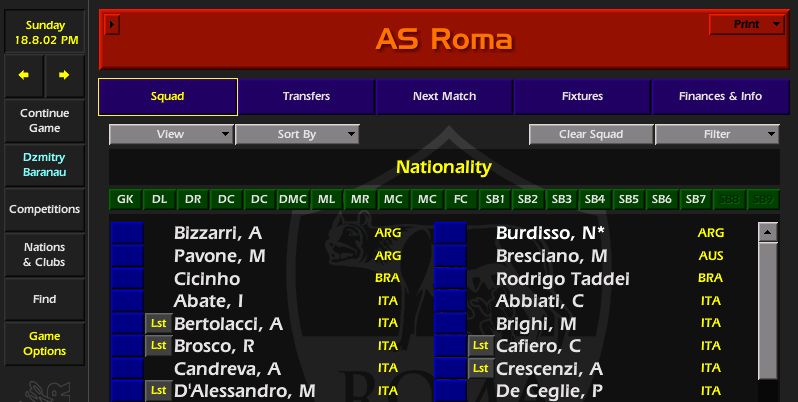 So I decided to give this big one a try.
And when I started it first time, I was superkeepered 3 times at CL group stage and out, so I deleted whole progress and started again.
Hardest part is to get rid of all players you don't need, faced this in Torino challenge and never completed.
Also big mistake was to sell main GK after season one and get two others on a free, results went down a lot in 2nd season.
All players which not show ITA nationality have it as second one.

Already got a job in CL side Bordeaux, who lost their coach to Liverpool, looking positive into new season.
Last edited by Dzmitry on Wed Oct 27, 2021 8:35 am, edited 1 time in total.
Top

Finished my French part of challenge.

As I said earlier, I was lucky to get job in CL side Bordeaux, and I got it early enough to make a lot of needed transfers and get the maximum amount of points from the start.

BTW, while in first season, I was almost buried with cups and matches every 2-3 days in spring, so in second season I lost the very first matches in both cups, and it helped a lot. In third season my team was too strong, so I was able to play two different teams - one in league and CL and other in cups. 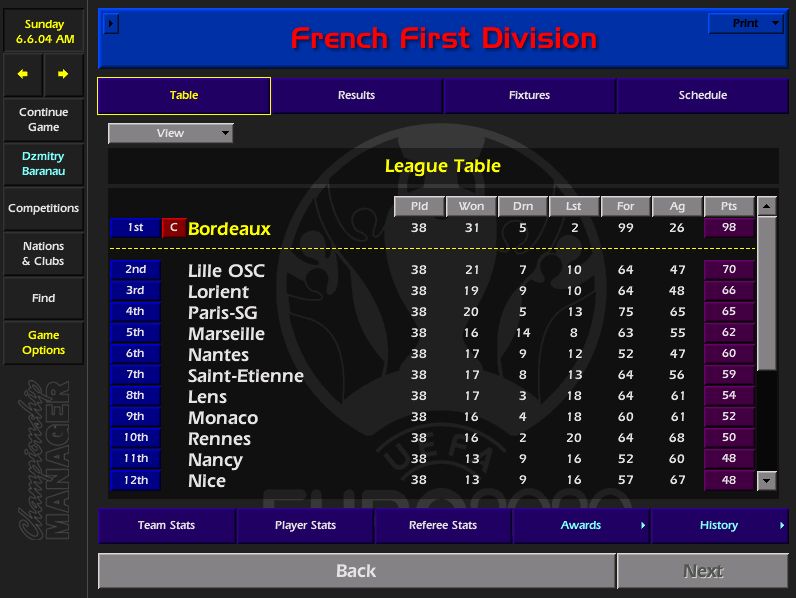 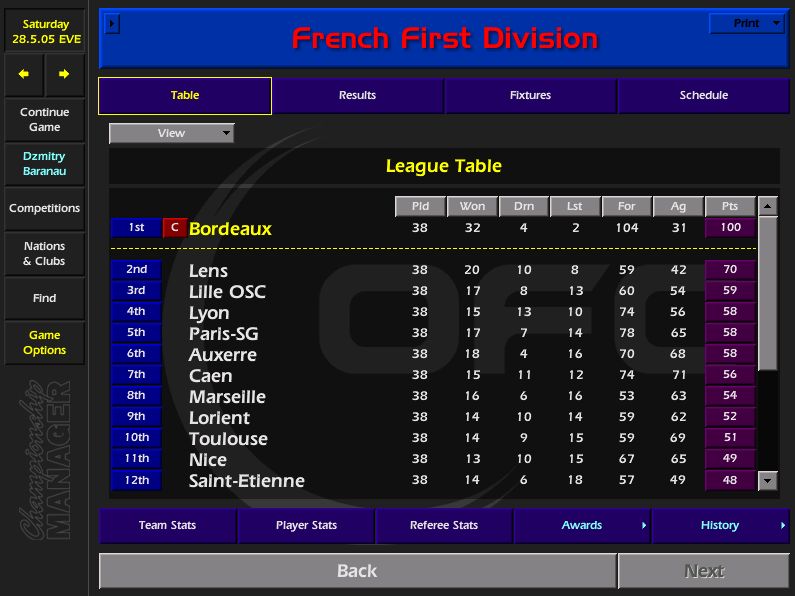 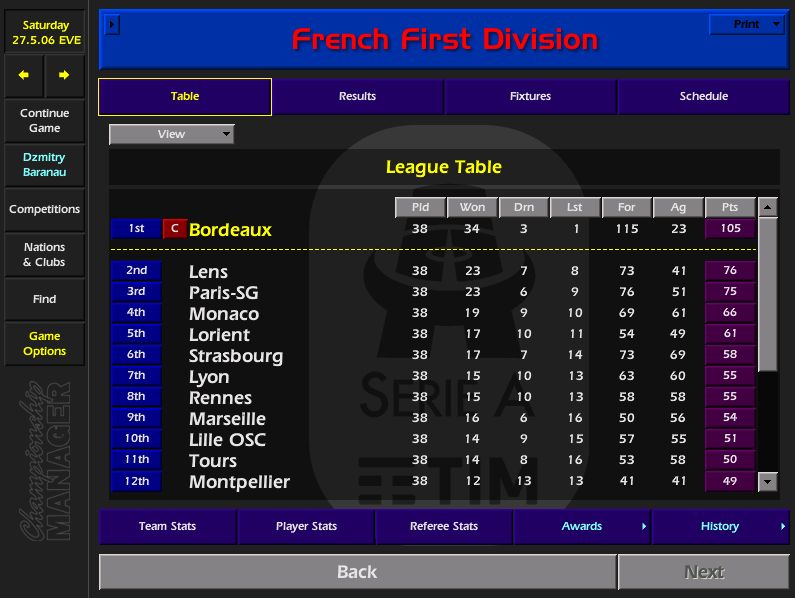 No job in Greece since May and until September.
Probably want to get a job in one of the big clubs like Olympiakos or Panathinaikos, if they struggle in league, or smaller like AEK or PAOK at least.
Top 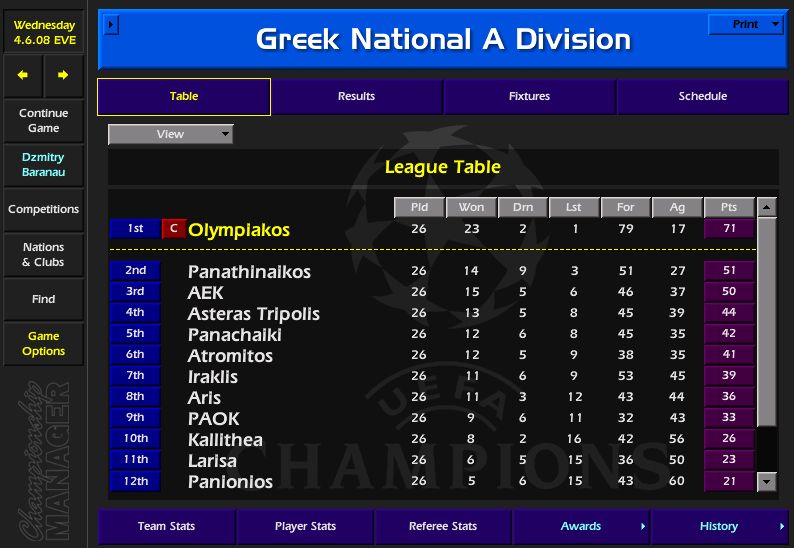 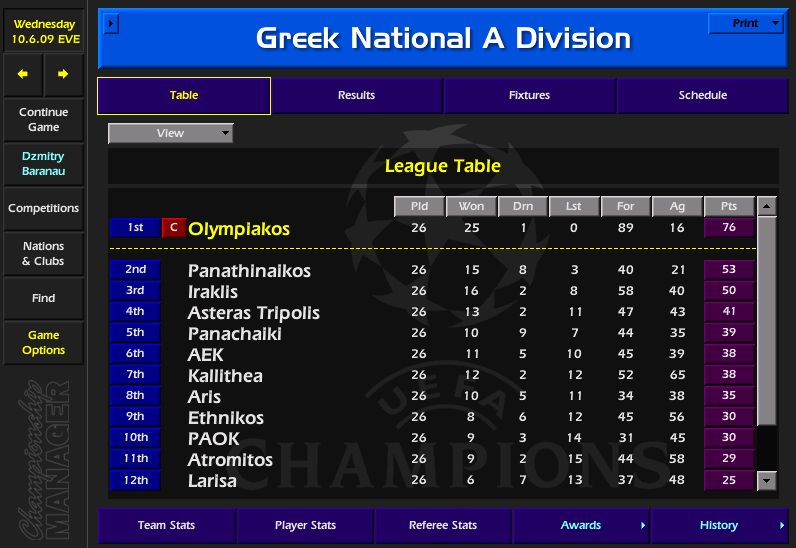 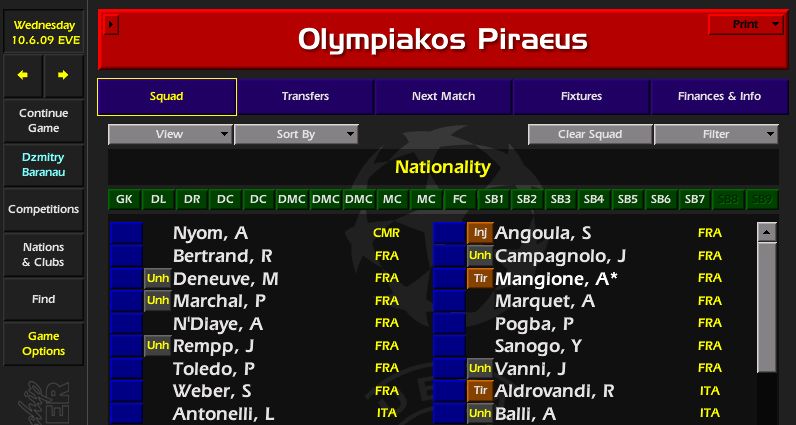 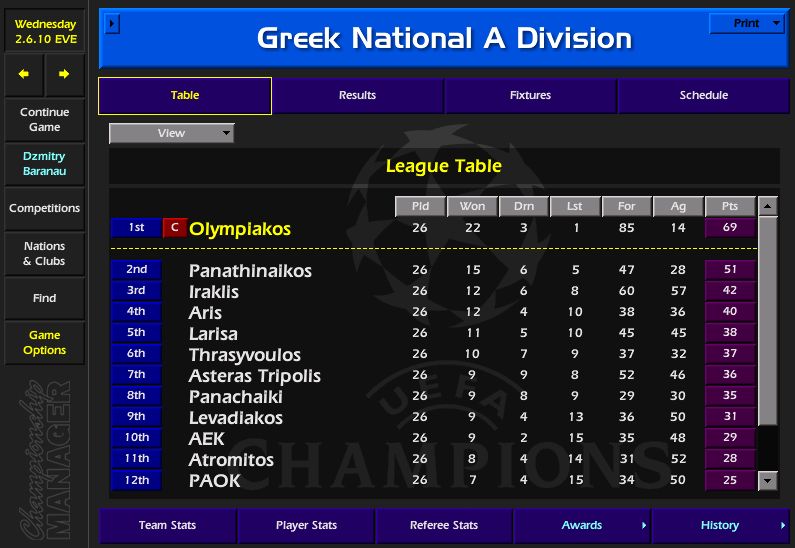 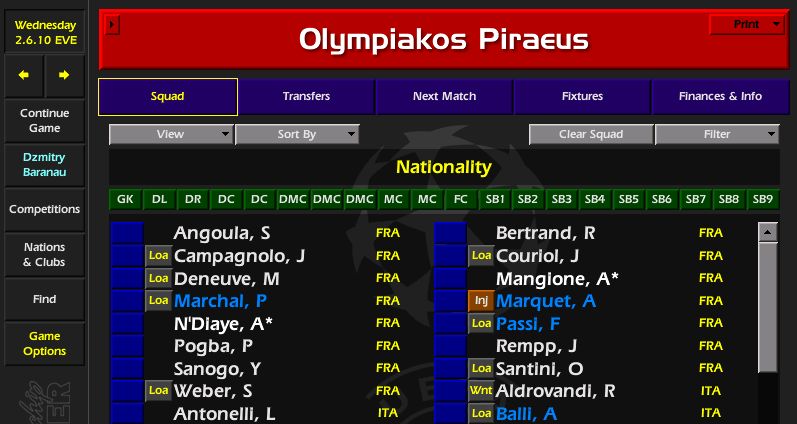 So Greek part is now over too.
Skipped a lot of jobs until 2nd placed Olypiakos sacked their manager two matches before season end. With a lot of time and 54m budget it was easy enough to build good team, and Greek league is just too easy to conquer.