CL qualification is the target for me

Our run in the competition didn't help our nation last season, so I guess that unless a German side wins it this season, we'll need to make the top three of the Bundesliga.
Top

We got off to the worst possible start, when a Schalke attacker got above Josef Resch, and got on the end of a cross, to head the visitors into a 3rd minute lead. Things didn't improve after that, and we deserved to be behind at half time.

I switched from the 343 formation to 433 early in the second half, but that didn't help much, and we fell further behind when the same attacker got above Lukas Kersken, to got on the end of another cross, and double Schalke's lead in the 63rd minute.

These changes had an immediate impact. In the 71st minute, midfielder Daniel Langner sent the ball into the area, for Neumann to head it into the path of Wouter Van Hyfte, who struck the ball with fury, to pull it back to 1-2.

A minute later, Van Hyfte played the ball to Langner, who sent it into the area for Neumann to head in the equaliser. 2-2.

Either side could have won it in the end, though I think that we were unlucky not to win, as the Schalke keeper was the busier of the two.

Markus Neumann's cameo roll of an assist and a goal earned him a 10 rating, and the Man of the Match award.

I made five changes for the visit of Borussia Mönchengladbach, for this Rheinland derby, and lined up in the 433 formation.

We started brightly, and won a free kick in the 15th minute. Jannick Fiedler lined it up, and did brilliantly to beat Christian Klaus from 25 yards out, and give us a 1-0 lead.

We were containing my former club well, and things went from bad to worse for them when star player Marwan Soliman received a straight red card just before half time.

The second half was a bit closer, but we were well worth the win. My centre back pairing of Luciano Vega and Rico Sonnenberg were superb, Daniel Langer's performance at the heart of midfield, creating three chances, and winning three tackles earned him the Man of the Match award, and Markus Neumann proved to be a right handful up front. 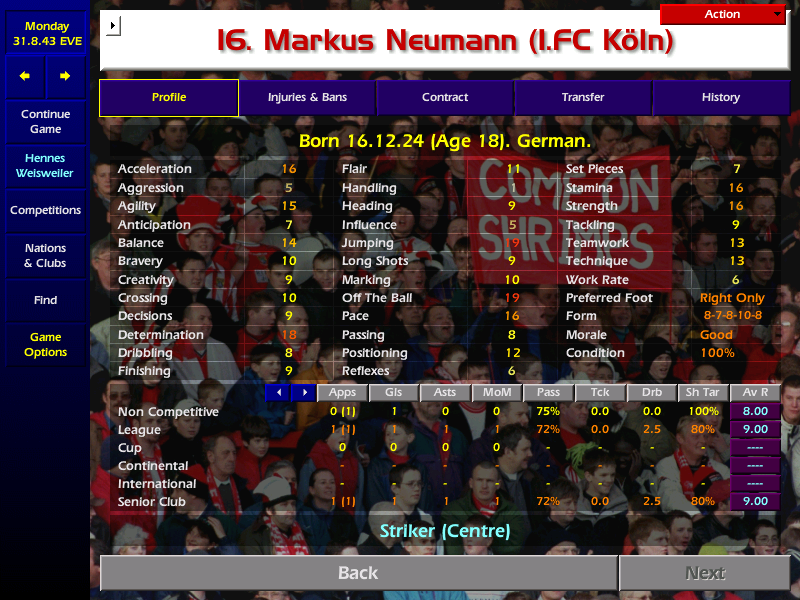 I made eleven changes for this trip to 3.Liga North side Rostock, and gave four players their debuts.

This was a much more comfortable win than the scoreline suggests. We contained the hosts well, and had we been a bit more clinical in front of goal, we could have scored more. 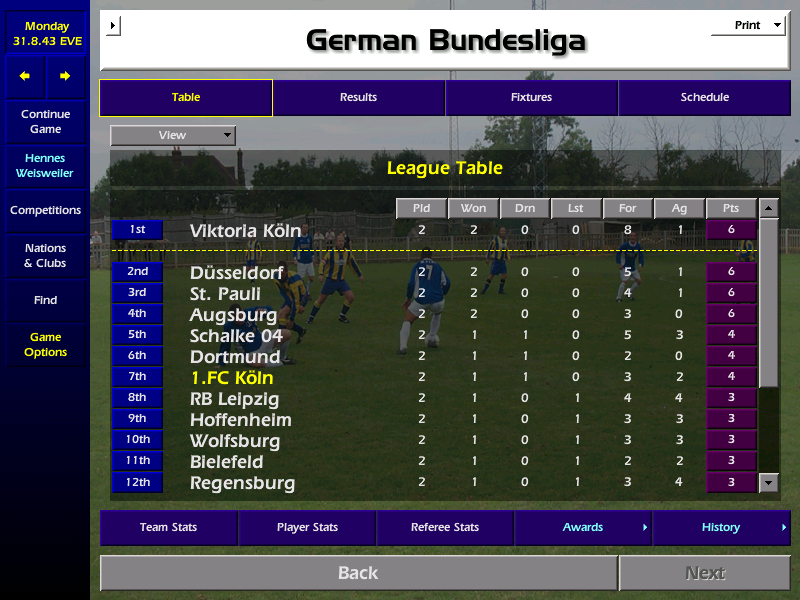 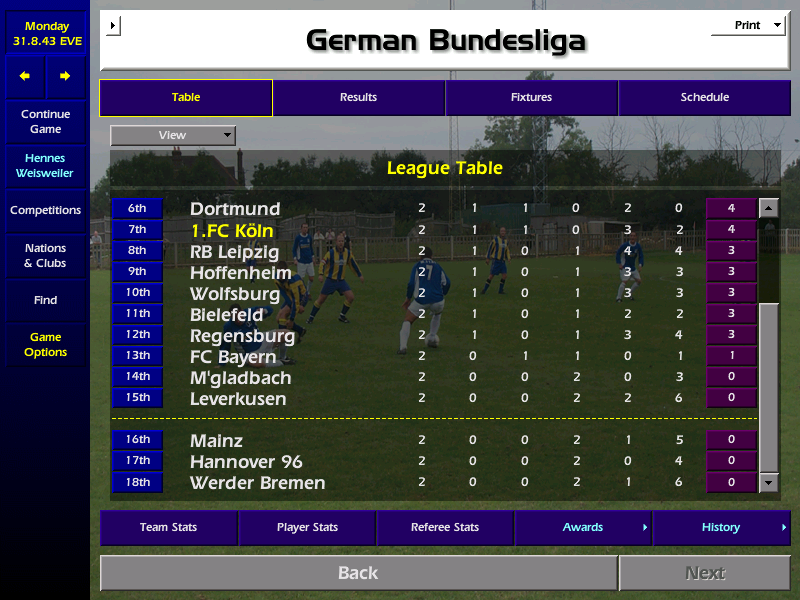 It's too early to draw any conclusions from our league position. Four points from our opening two games is a good start, though I'd have probably expected to have beaten Schalke and drawn with Borussia Mönchengladbach, rather than it being the other way around.

I was pleased with the comeback against Schalke. It's something that we've shown that we're capable of. You may recall that during the second half of last season, we were 1-4 down at Viktoria Köln, and came back to draw 4-4. We also fell behind three times at home to St. Pauli, before winning 4-3.

I'm delighted with the way that Markus Neumann has started. He looks very raw at the moment, but he's already shown that he can be difficult for defenders to deal with. I'll be interested to see how he develops. 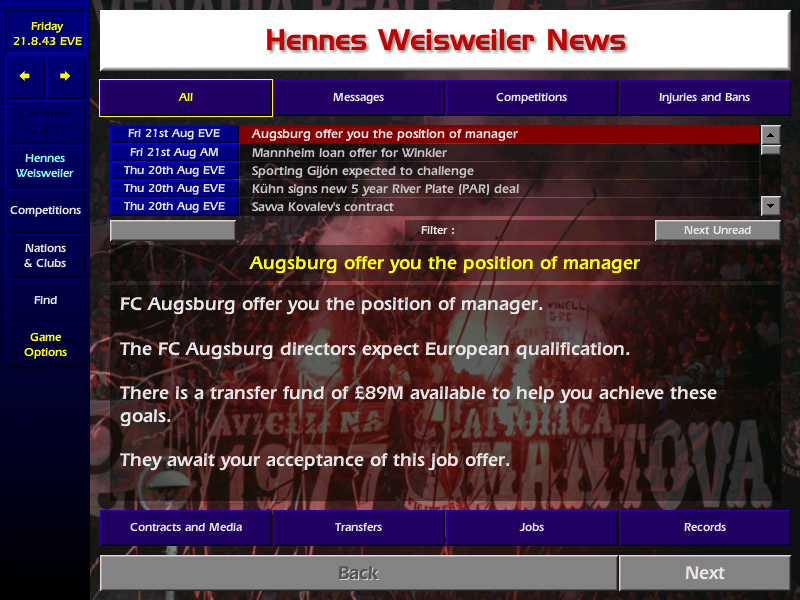 Nice to know that I'm still in demand. I also think it shows that perhaps FC Köln don't have a particularly high reputation, if middling clubs are headhunting me. This may also explain why when I find players that I might be interested in signing, and add them to my shortlist, around half of them are filtered out when I select 'Interested'

I've managed to bring in a couple more players in the final two days of the transfer window. 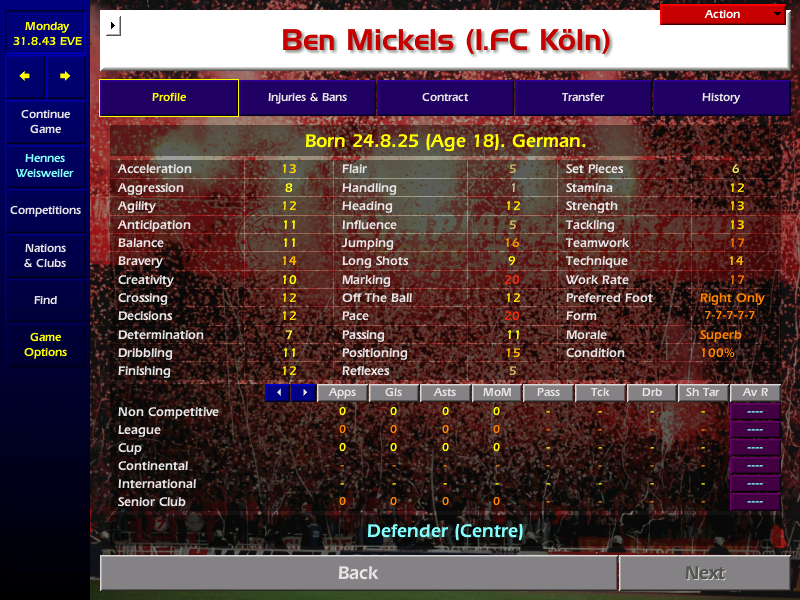 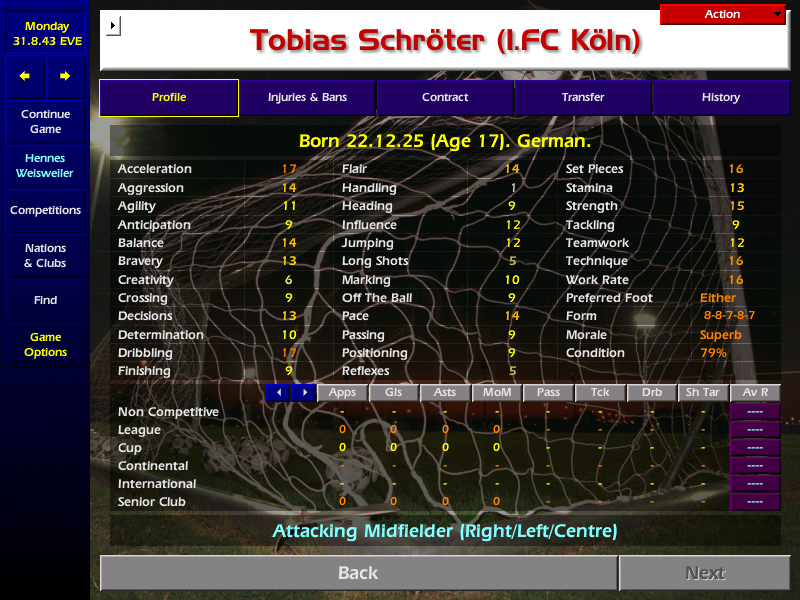 His value for Determination is a little low for my liking, but I got one of my scouts to assess Ben Mickels, and he reckons that he could be a useful addition to the squad. Most players that this particular scout assesses, aren't considered good enough, so I tend to take notice if he has something positive to say about a player.

Ben cost £3.5M, and arrives from 2.Bundesliga side Offenbach, so it's not too much of a gamble for this club, with it's cash reserve of £1.3B.

I quite like the look of Tobias Schröter. He was on a rolling contract at non league side Norderstedt, so I got him on a free transfer. His value for Dribbling is already high, so I'll probably look to alternate him between skill and tactics training, in a bid to improve his other attacking values. 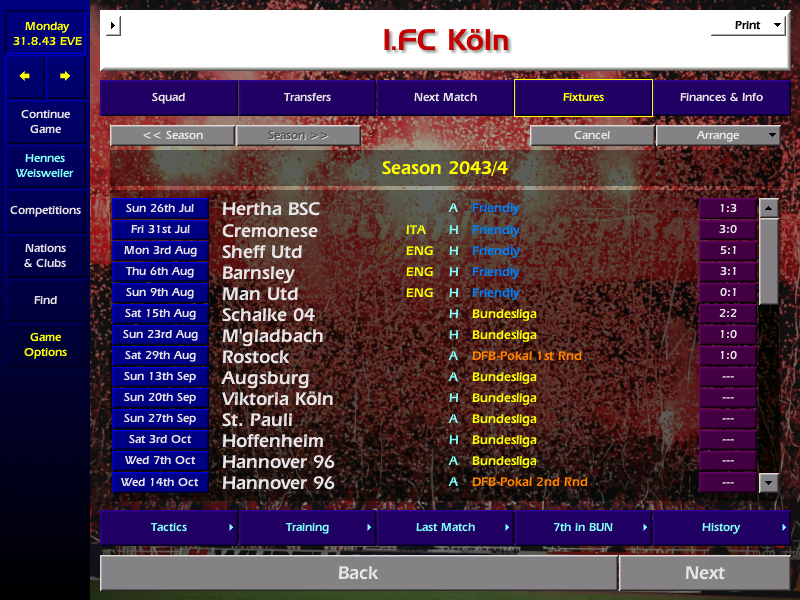 A trip to Augsburg, who have won their opening two Bundesliga games - without conceding - awaits us.
Top

Excellent start to the season!

Wonder if Augsburg will be angry after you turned them down!
Top

Excellent start to the season!

Wonder if Augsburg will be angry after you turned them down!

They'll be even more angry after we played them!
Top 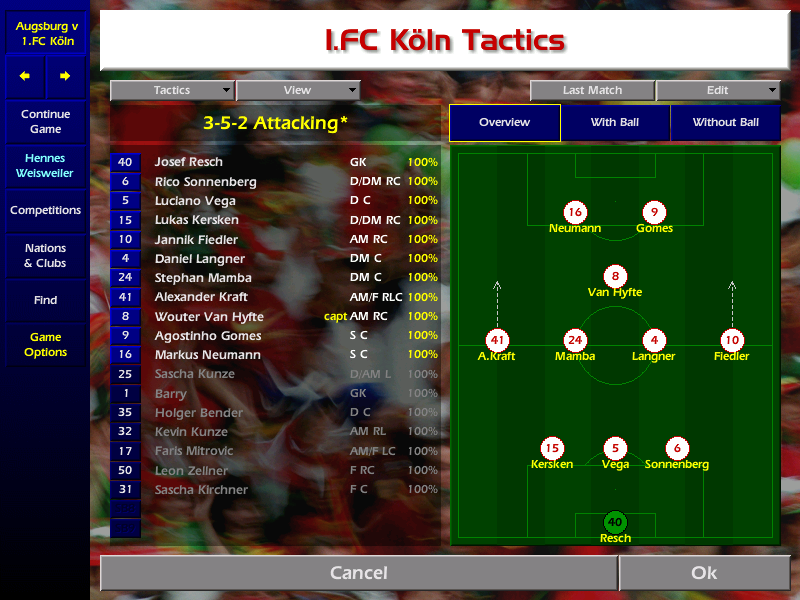 We got off to a good start when Wouter Van Hyfte was first to Daniel Langer's parried shot, to fire us into a 1-0 lead in the 11th minute. Augsburg equalised in the 22nd minute, when a cross from their left hand side was headed in off the post. 1-1.

We didn't take long to get back in front. Jannick Fiedler received a cleared ball, moved forward, then crossed it into the box for Van Hyfte to volley us into a 2-1 lead in the 25th minute, with his second of the afternoon.

Five minutes later, Langner received the ball from a throw in, moved forward, and took the ball past a defender, then sent a cross into the box for Markus Neumann to head us into a 3-1 lead.

The game was much closer than the scoreline suggests and in the 54th minute, Augsburg deservedly pulled one back when former Borussia Mönchengladbach striker Bernard Stankovic took the ball past Lukas Kersken and Rico Sonnenberg, to score a sublime goal.

We contained the hosts well for the remainder of the game, to secure a deserved win. Captain in Philip Kraft's absence, Wouter Van Hyfte, earned a 10 rating to win the Man of the Match award. Along with the Belgian under 21 internationals's two goals, he also won an impressive seven tackles.

I made three changes for the visit of 4th place Viktoria Köln, and returned to the 433 formation.

We started the game well, and in the 4th minute, striker Agostinho Gomes sent the ball into the area, for Wouter Van Hyfte to head us into a 1-0 lead. Viktoria Köln equalised in the 25th minute, with their only chance of the game, when their striker got above Rico Sonnenberg, to head in a cross, and make it 1-1.

We were unlucky not to be in front at half time, but started the second half well. In the 47th minute, left back Leon Götze played the ball to midfielder Daniel Langner, who moved forward, then sent it into the area towards Gomes, who headed in his first goal of the season, to make it 2-1.

We contained the visitors well throughout the game, for a deserved victory.

I made three changes for the trip to 5th place St. Pauli, to enable us to revert to the 352 Attacking formation.

Well fell behind in the 2nd minute, with an effort that Josef Resch could have dealt better with. This set the tone for an entertaining first half. Resch made amends by making a couple of important saves.

Striker Markus Neumann was injured, so I gave Sascha Kirchner his full Bundesliga debut. It came to a premature end, when he went off injured in the 21st minute, so I brought on academy product Klaus Ghafourian, who made his Bundesliga debut.

Two minutes later, Ghafourian won us a corner. Jannick Fiedler's delivery was perfect, for Wouter Van Hyfte to win his aerial challenge, and head in his fifth goal of the season, to make it 1-1.

We dominated the second half, but former Borussia Mönchengladbach keeper Enes Akgün made some important saves, and denied us what would have been a deserved victory. Wouter Van Hyfte was Man of the Match for the second time this season. 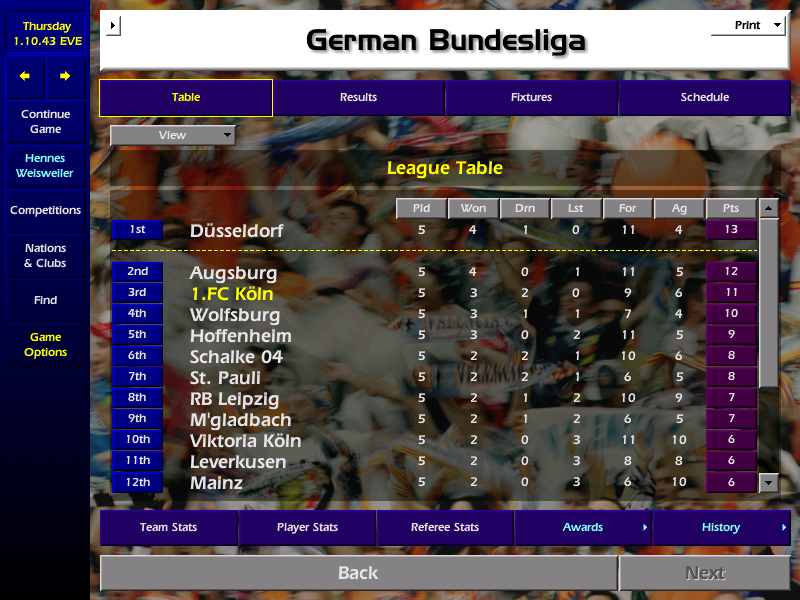 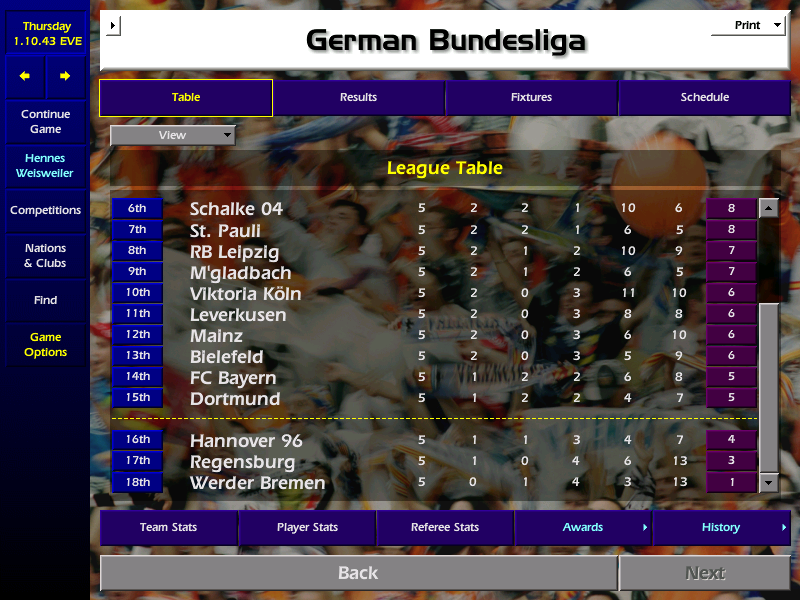 It's early days, but the signs are good. We did well to beat Augsburg, who have won their other four games, and we got a good point at St. Pauli, where we were unlucky not to win.

Borussia Mönchengladbach haven't been the force that I expected, though it's too early to write them off. Also, Bayern have often started slowly in this save, before going on a good run.

I hope that we can sustain this good start. Obviously I want us to win the league, but if we finish in the position we're in now, that would give us a good platform to mount a title challenge next season. 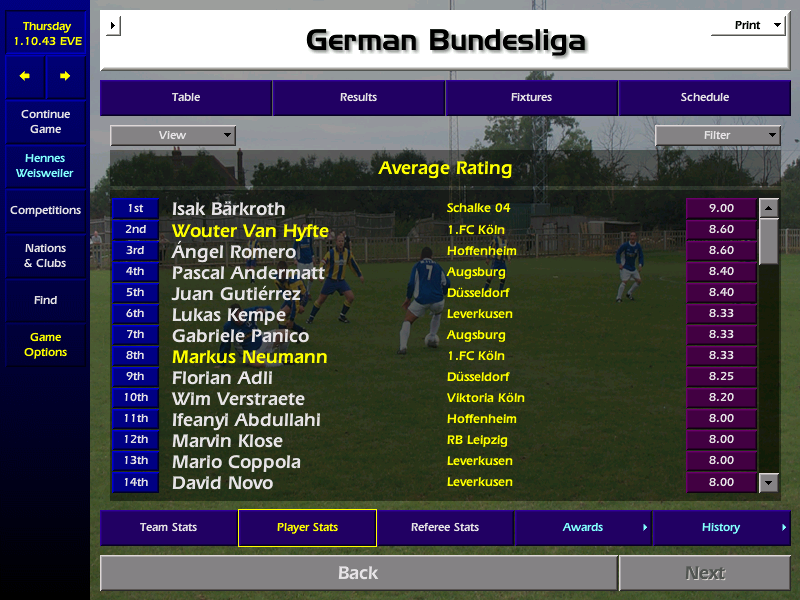 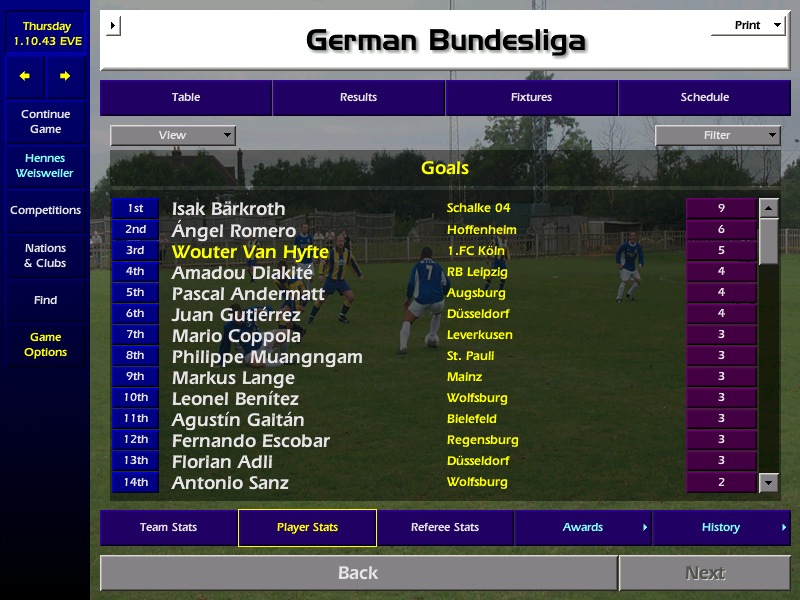 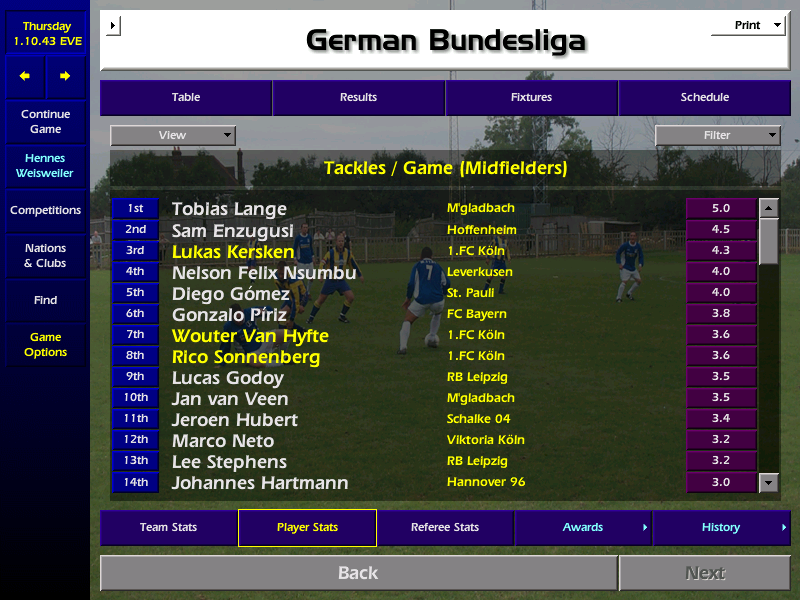 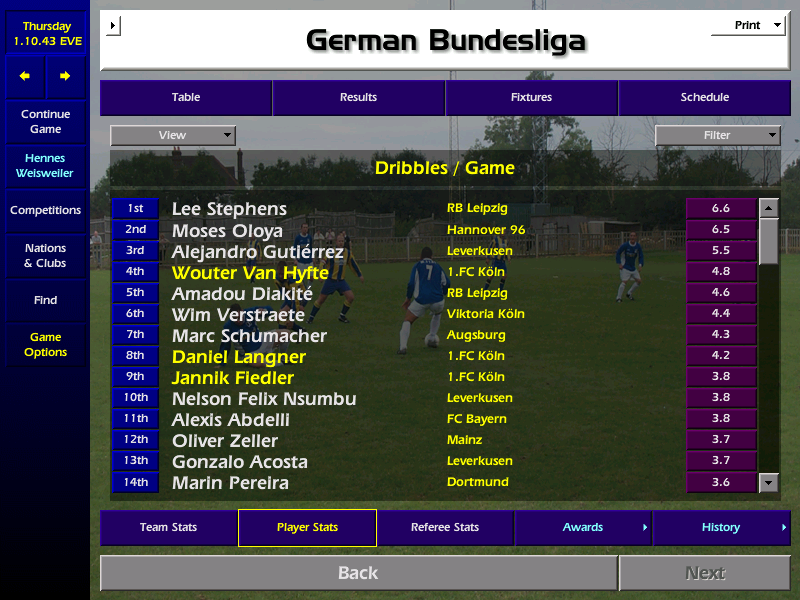 Wouter has had a fantastic start to the season. He's been talismanic for us, and provides just as much threat whether I deploy him behind the front two in the 352 Attacking formation, or on the right of the three central midfielders in the 433 formation.

He seems to be revelling in the extra responsibility I've given him, by making him vice captain to Philip Kraft.

I need to be careful not to overuse him, as he's already finishing games exhausted. At the start of the season, I said that I'd rest important young players for Bundesliga games against bottom four sides, and DFB Pokal games. We have back to back games coming up in October against Hannover 96, so I'll be able to rest Wouter, along with Jannick Fiedler. 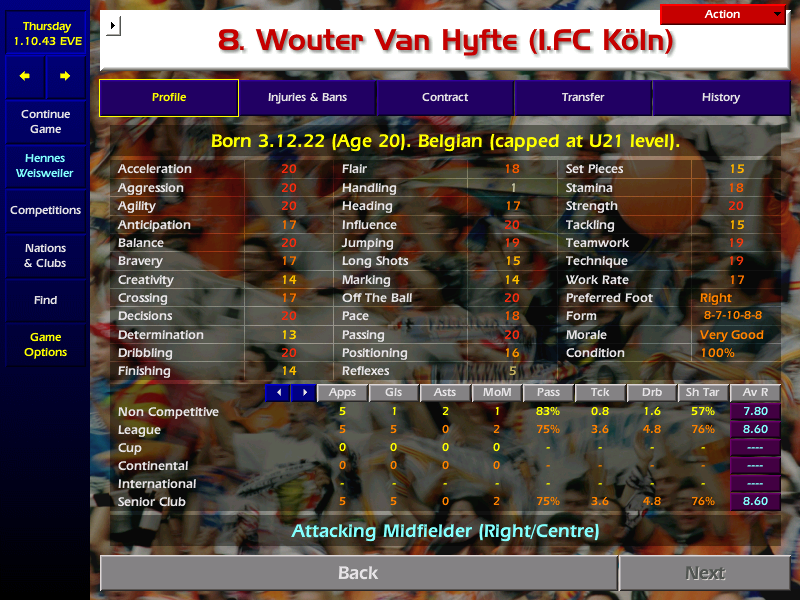 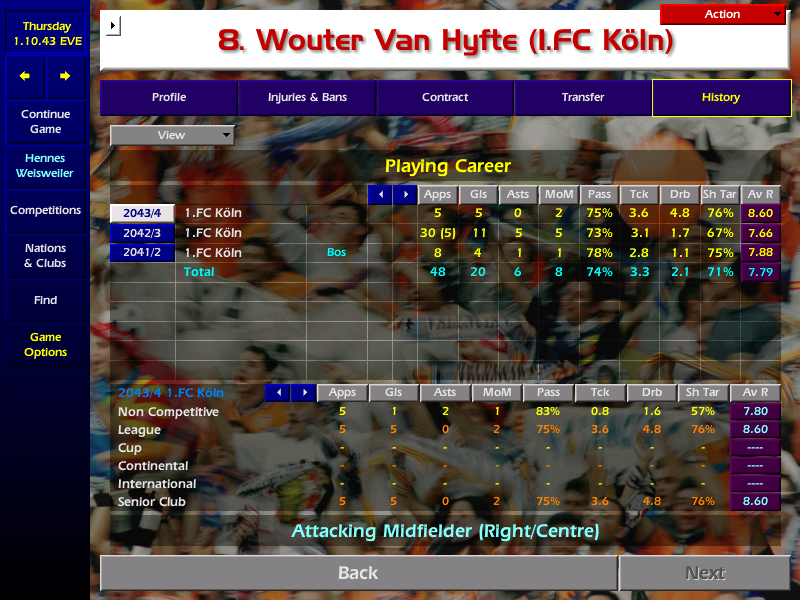 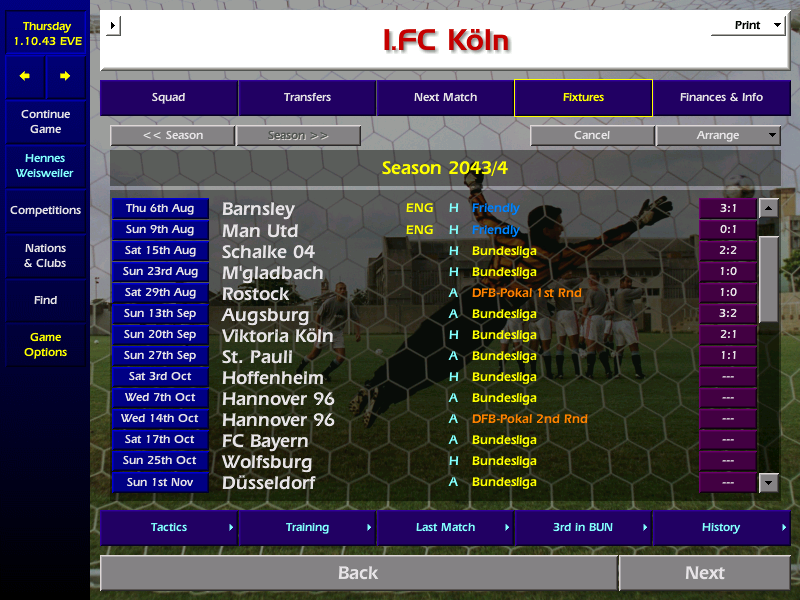 Our opening game of October is against Ángel Romero's new club Hoffenheim. He has had a blistering start, and pipped Wouter Van Hyfte to the Player of the Month award for September.

I hope that I don't regret selling him to one of our Bundesliga rivals. In my defence, I'd accepted a £35M offer from Mexican club Pacucha, which Hoffenheim matched. I told them that they would need to pay me £42M to get Romero - which they agreed to - so I cancelled Pacucha's offer.

Now I'm starting to think that only seeing the £££ signs was a bit of a mistake! Ángel was quite inconsistent for us though, so hopefully his form will dip, and Hoffenheim will remain below us.
Top

This is a very nice start to the season!

Not the easiest cup draw
Top

This is a very nice start to the season!

Not the easiest cup draw

I thought Bayern might be back after they won their first title in 11 seasons in 2041. They spent quite heavily that summer, but made just two Bosman signings in the summer of 2042, and nothing since. Per Mertesacker is their manager, but he didn't have a particularly good track record before then.

A lot of big clubs have floundered as the game has gone on. In England, Liverpool haven't finished in the top four for eight seasons, Man Utd have just been promoted from the Championship, and Arsenal were relegated from the Premier League last season.

In Italy, Juventus haven't finished in the top four for seventeen seasons, and Milan are fourth from bottom in Serie B. La Liga is the only place that remains familiar looking. Real Madrid and Barcelona have finished in the top two for the past three seasons, though Rayo won it in 2040.
Top

Never seen an AM put in that many tackles, no wonder he is exhausted. Solid start to the season and with no distraction of European football, the squad should be able to carry on in that vein.
Top
Post Reply
184 posts