One thing that's been frustrating me for as long as I can remember is defenders that look like beasts, but still never tackle. I've wondered about this for ever, even asked about it on the previous site a few years ago, but no good answers.

For me, after a few seasons in every game, buying defensive players (full backs, centre backs, defensive midfielders..) is like a lottery. You can get some that's fantastic with 4-7 tackles on average, but some of them are below 1 tackle per game and practically unplayable.

I think I may have found out why, but it's still just a hypothesis, haven't been able to verify it 100% yet. I got a longplay save going (almost done with season 49) with three different teams and what I did was check the players positioning stats in GK-editor. Some of the players had 100+ intrinsic values, one fullback even had 120! The highest intrinsic value of a player who did tackle a lot was 102, everyone above that value didn't tackle. I tuned all of them down to 70-90, which is still a lot, and now it seems as the problem may be solved. Most of the non-tacklers are now throwing themselves into the action like there's no tomorrow!

I know there's a patch now to reduce the high intrinsic positioning values, but I don't know if it will work on saves, and even if it does I'm not willing to risk my old save in case it messes things up and breaks the save. So I will continoue to downgrade the positioning stats in the editor for the new players I buy. I will report back as I play further, only done a handful of games so far, but this sure looks promising.
Top

I believe I read about it a while back, but now I can't find it!
Top

Here are a few results, before/after screenshots. All these players were adjusted down to 90 intrinsic positioning
DC, was 120: 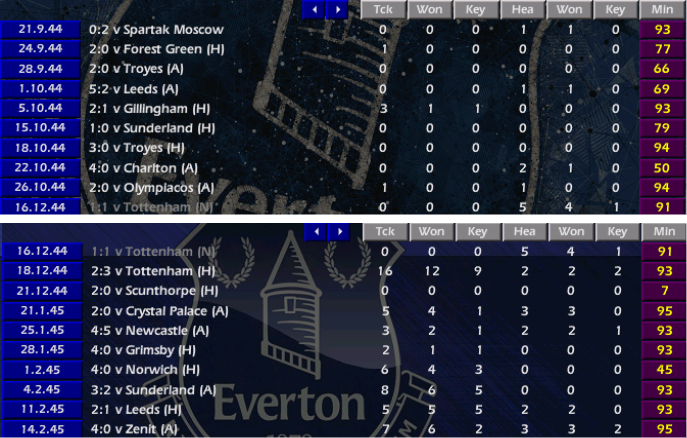 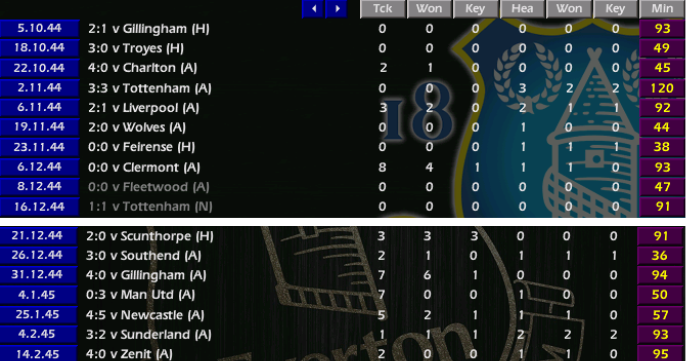 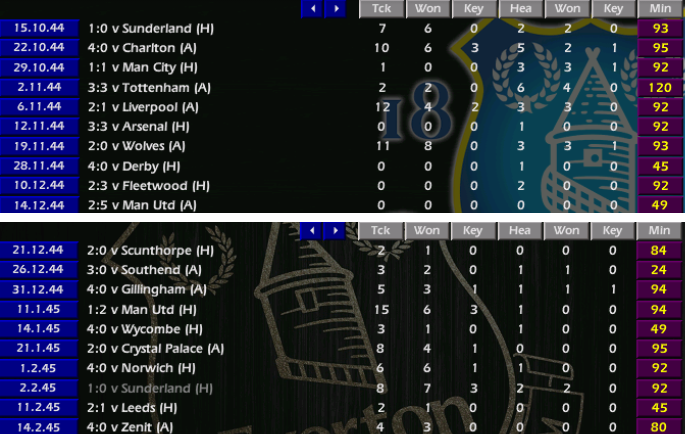 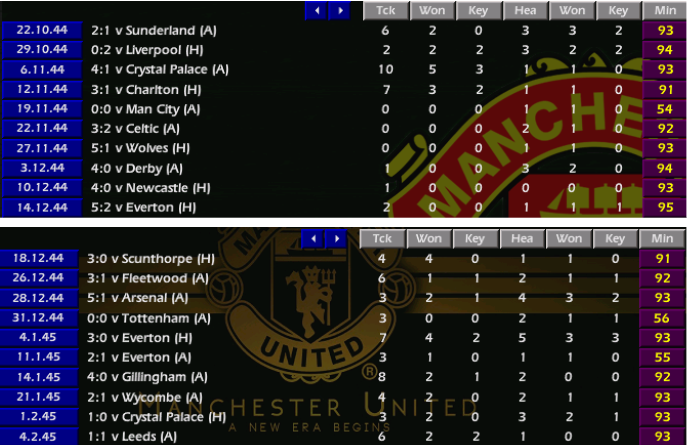 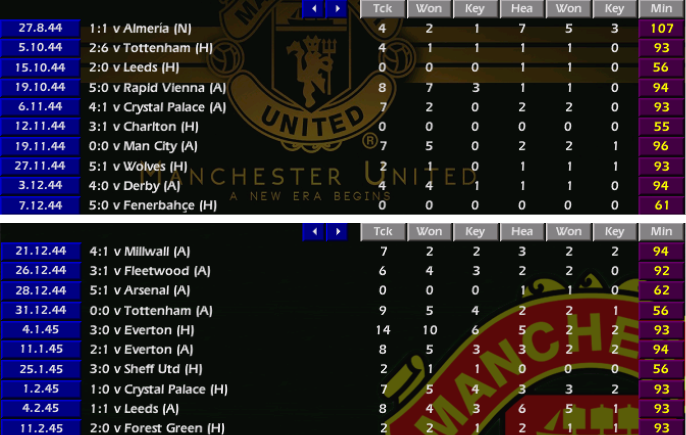 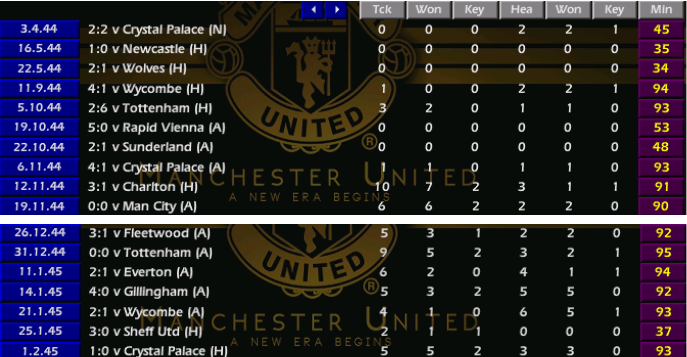 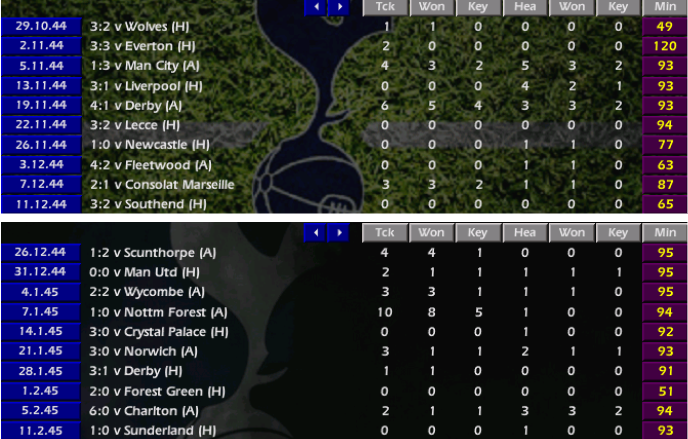 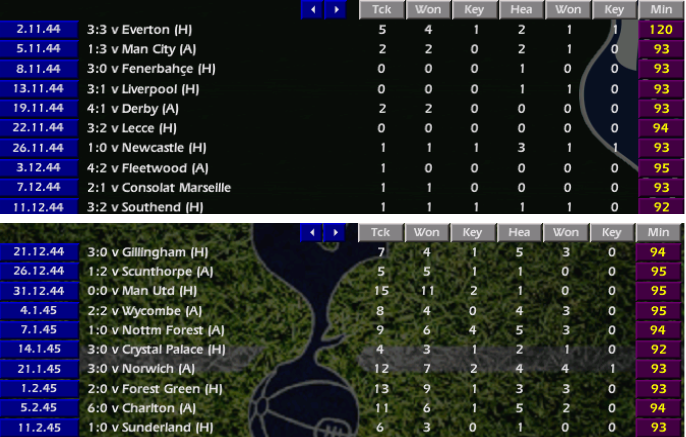 It's hard to conclude after so few tests, and I haven't done the math, but it seems like none of them didn't improve.
Top

My comment is like this
*If defenders are really using only positioning value as tackling value instead of tackling value, it is worth to investigate and try to make a patch for improvement. Madscientist found that AMC players were using reflex value for creativity and made a patch for solution.
*If not, this is how the game is.

AtomicAnt wrote: ↑Sun Feb 21, 2021 7:18 pm I think I may have found out why, but it's still just a hypothesis, haven't been able to verify it 100% yet. I got a longplay save going (almost done with season 49) with three different teams and what I did was check the players positioning stats in GK-editor. Some of the players had 100+ intrinsic values, one fullback even had 120! The highest intrinsic value of a player who did tackle a lot was 102, everyone above that value didn't tackle. I tuned all of them down to 70-90, which is still a lot, and now it seems as the problem may be solved. Most of the non-tacklers are now throwing themselves into the action like there's no tomorrow!

Brilliant finding @ant and @xeno. There seem to be a bug indeed, with positioning and marking.

Now I found positioning and marking get another boost which can lead up to a 600 value.

I remember when I hacked some high in_match values for off the ball and finishing, the max I could go was 127 in the float var, if i put a higher value than 127 the player would stop making goals. So positioning and marking seem to be getting this bug naturally due to their extra boost.

A value higher than 127 would occur when the in_match value pre-boost is above 25 approximatelly, which means the player has a very high intrinsic for positioning.

One easy fix is to prevent it going above 127 (i just dont know if there is space in the exe to put this check). Or another fix is to simply remove this extra boost (but in this case positioning would become much less powerful in the game).
Top

When you look at tackle leaders of the league, all they have high positioning with high instinct values 90 to 120.
But, as you see at AtomicAnt's images... players who have high instinct positining - never or low tackle too.

During matches - high anticipation and decisions values can make less effective the positioning value. This is possible. (example Maldini regen)
May be some attributes which are high, neutralize to tackle.
Altogether i don't understant - where is the benefit of ''decisions'' ? Here our lovely game conflicts with real life.
Defenders with high decisions less tackle, wingers with high decisions - less dribble.
I think there is a bug in game engine, which we have to solve.
Top

I think the problem here is not losing tackles. They can lose, no problem, it is their quality.
The problem is mostly ( 0 tackle ) they dont even attempt for tackles which can be related with other values such as positioning, bravery, decisions, determination, ambition, pace, anticipation ( concentration ) , etc.
* [TUTORIAL] How to install and run the game CM0102?> viewtopic.php?f=85&t=3571
* [TUTORIAL] How to patch your game? Nick's CM0102Patcher,Tapani Patcher,Saturn,John Locke,OllyDbg> viewtopic.php?f=85&t=2956
Top

I just verifyed it 100% in debug mode in olly, as I describe below. You are absolutelly right, once again great finding @ant.

This causes players with very high intrinsic values for positioning (and marking) to perform poor and make few tackles.

The fix may not be so simple.

I confirmed this in debug mode with the following test:

I created a 200 CA player with a insane intrinsic for positioning, which results in a in_match value of positioning of 437.40 (after the mega boost is applied) as you can see in breakpoint below:

Then function 945640 is called. This is the function that typecasts the float value to a byte value, and puts the result into AL register.

As its typecasting 437.40 to one byte, the typecast function picks only the last byte, which is B5. So it stores B5 into AL, as we can see in screenshot below.

B5 is -75. So this means this player received -75 as in_match value for positioning. This is the reason for his poor performances and poor number of tackles.

I see two possible fixes: one is clamp the positioning value to some max number like 127 (but this requires extra space in the exe for the check and im not sure how to find space), other is to remove the mega boost (which i even did this fix, but its bad because positioning and marking becomes weaker for all players in the game, so the ammount of goals dramatically increased, and we dont want that - although that could be useful for fixing the lack of goals in future generations).
Top

Thanks MadScientist,
What is found here also proves that positioning attributes positive variance is not the root cause of lack of goal in future generations , right?
May be another attribute such as jumping positive variance of regens causes lack of goals.
* [TUTORIAL] How to install and run the game CM0102?> viewtopic.php?f=85&t=3571
* [TUTORIAL] How to patch your game? Nick's CM0102Patcher,Tapani Patcher,Saturn,John Locke,OllyDbg> viewtopic.php?f=85&t=2956
Top

In future generations many DCs have very strong strinsics for positioning but I dont know if they are strong enough to be a 25 in the match engine so I cant say if they are affected by the bug or not (only those above 25 in_match value are affected).

However as Ive said in some other threads, positioning isnt the only root cause for lack of goals in future generations. Another very important cause is the creativity bug (where reflexes is used for creativity), because in future generations there is a huge number of players affected by the creativity bug, so their huge creativity value is useless (and this huge values still steals intrinsic points from other important attributes such as finishing and passing), resulting in less assists and chances of goals;
Top

To explain whats this mega boost the match engine applies to positioning and marking:

STEP 1: it calculates the in_match value as usual for all attributes:

STEP 2: it applies the mega boost (this only happens for positioning and marking):

STEP 3: it applies another small boost (which also happens for some other attributes besides positioning and marking)

So whenever the in_match value resulting from the 3 steps is higher than 127 then the bug occurs and the player will receive a wrong value and make few tackles and perform poor defensivelly.

I did a patch to remove step 2, this fixed the bug (because without step 2 the resulting value never gets above 73) but consequently it also nerfed positioning and marking so its a bad fix.
Top

The screenshots below show the original game (i.e. with the bug and mega boost to positioning and marking) versus my bad fix (where the bug doesnt occur but where i removed this mega boost).

We can see in the original game the DCs perform better and there are less ammount of goals than in my bad fix, because I removed the mega boost to positioning and marking:

Tackles Original VS my bad fix: 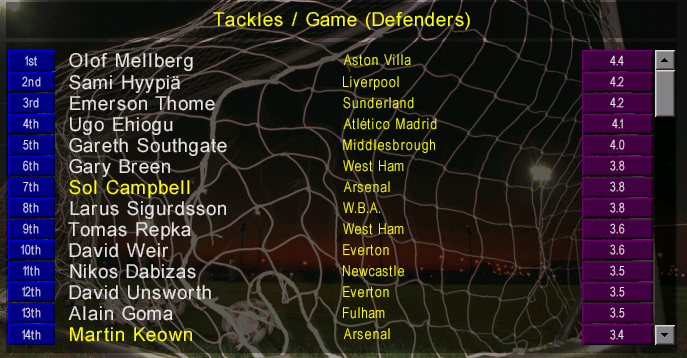 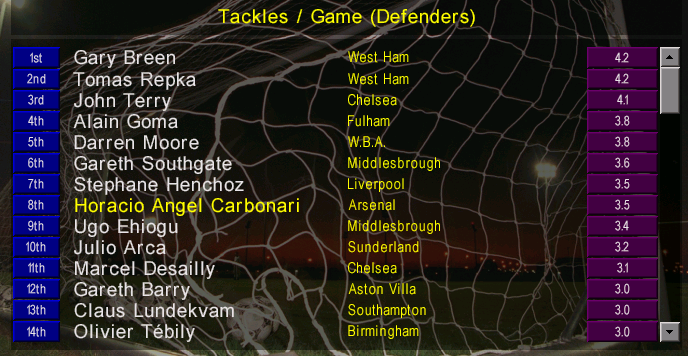 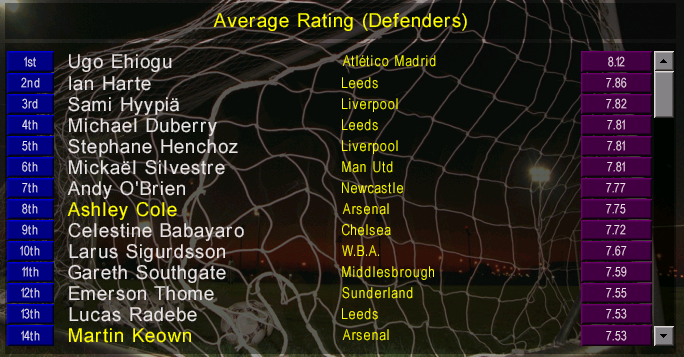 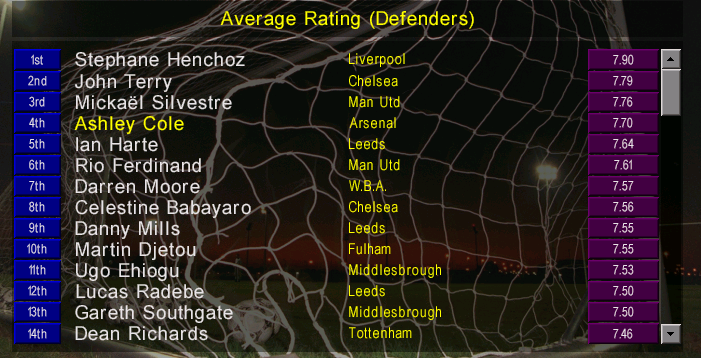 MoM Original VS my bad fix: 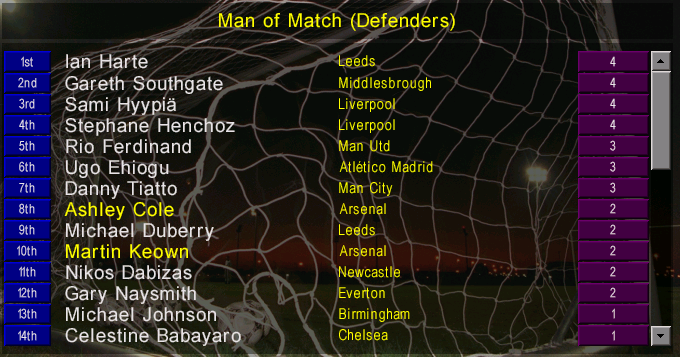 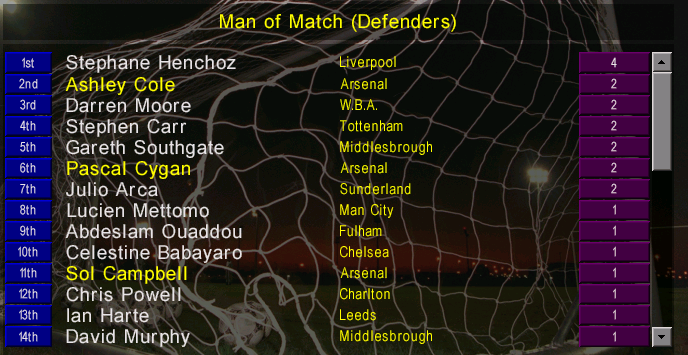 Table Original VS my bad fix 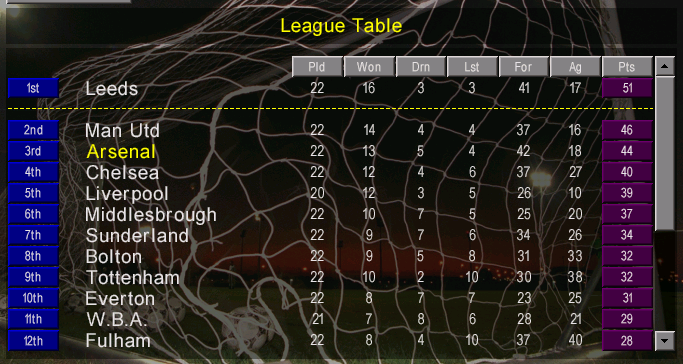 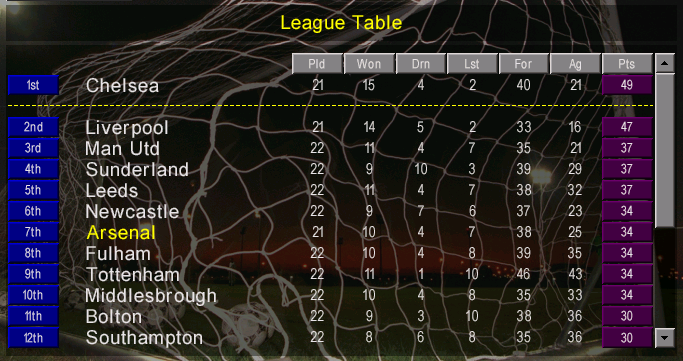 Anyway, in case someone wants to try this bad fix, this is the patch (compatible with .68, tapani and saturn):

In german first division, look at 005D9D31 where it checks for the year. You can jump for the second case fixtures and you get the whole first case as free space for this patch. It won't harm anything, as it's just a check to make 2001 fixtures different.

Another example of this bug was reported here: viewtopic.php?f=31&t=3670
Top

Oooh I didn't know about this bug - well done MadScientist & AtomicAnt for finding it! This needs fixing.

So I used my expanded exe patch to make space and did:

A patch for the above to use in my patcher would look like:

EDIT: Oh and I picked 126 rather than 127 because in my head I seem to remember something about 127 having issues - but that could be completely wrong. But shouldn't make any real difference here.
Top

Here was me thinking this was a thread dedicated to Paul Scholes.
Top

It might actually, if you read between the lines.
Top

So with the creativity bug and the high positioning thing with defenders in games further down the line is there a way of changing this via the GK in game editor,like specific player attributes I can change to help the goals flow again?
Got some long term saves I'd like to continue.
Top

Your code seems correct to me, nice one! When I have some time i will test in debug mode.

The negative clamp isnt needed because some lines above the value is clamped to a min of 2, so its always positive.

The same bug occurs to 'marking' attribute, just a few lines below:

The other attributes dont suffer from this bug because they dont receive the megaboost so their max in_match value is aroung 75.

just hard to spot them

126 should be fine, assuming they didnt make another overflow bug deeper down there where the value is used for match events (like summing a byte with another byte and storing in a byte without checking for overflows).

But I personally would clamp it to a lower value like 75 or 100 or 120 to help goals not drain out in future generations. Wont cause DCs to perform poor because they still receive the megaboost, just clamped to a lower value.
Top
Post Reply
21 posts • Page 1 of 1

Return to “Talents, Tips and Training”