@Derm: Hmmm, not come across that crash regarding Yugoslavia - but a good call! I should add that to my patcher if you select to change the year. The change is at:

Will update that like Tapani does in the future.
Top

That's due to them being active again

When they are inactive the game will crash eventually. Starting from 2001/02 it used happen most often at 2012 when the hosts draw made for 2016 if I do remember correctly. I think he just added a different nation in there in the eligible nations called.
Top

thank you very much
Top

Charles De Ketelaere has the wrong positions in this update. He is a DL,DML in the update but in fact he should be AM,F(RLC).
Just thought I would mention it.
Top

I am checking stadiums against the pics.cfg - notice you have for some reason changed the name of Middlesbrough's stadium. And mis-spelled Middlesbrough.
Top

anyone find any hidden gems for lower league saves?
Top

I appreciate you have had the (R) or Under 23 system in place for quite a few updates that I haven't used but my first experience of it, is that it throws up a lot of anomalies with regards the AI players released when the preset (R) transfers happen. Billy Gilmour got freed in my game to make room for some gimpy Chelsea U 23s, and Bayern have just released this guy on a free in order to welcome their latest batch of Bayern (R) incomers. 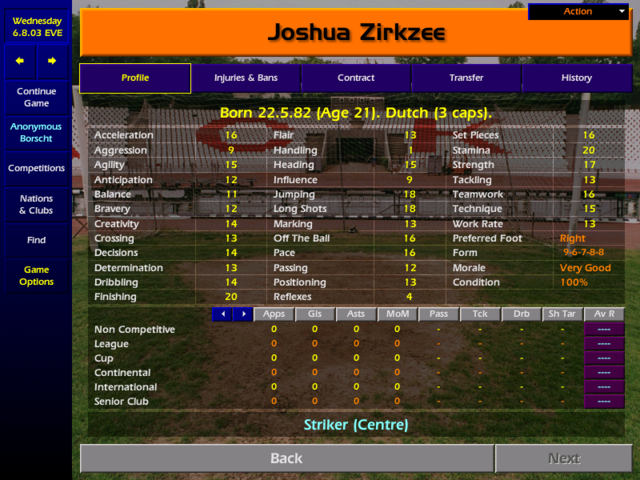 I had both of these guys on my shortlist, Gilmour had an in game value of £5.5m and the Bayern guy >£4m. Whilst it is lovely to have the chance to sign them for free it just doesn't feel real - I appreciate in the original, Serie A teams would release pretty decent players sometimes if they had hit their 50 complement, but at least they were doing that in order to bring in new players that the AI wanted.

I understand there are no easy answers given the squad sizes modern clubs now have and the limitations of the loan system in game. I also get that you can argue that some players don't make it for their academy club and then turn out to be brilliant, but this is the AI releasing players with massive in game values and caps for their country for free. I don't know the hidden stats of the guy above but I remember Gilmour was one of the players I previewed for my intial feedback after download and I remember they were pretty good. So the AI seems to be making bad choices over who to let go.
Top

It's interesting those 2 got released as previously it was alphabetical.

Those transferred are now only: -1, -2, PA130+ (and Internationals if there happen to be some that don't fit the previous criteria)

Availing of the "B Teams can have 50 players" patch in future would sort any issues like above in Germany, Spain and Portugal thankfully.
Top

I have some positional change suggestions for F.C Copenhagen:

Denzel Dumfries is the undisputed leader of PSV, so his Influence should be the highest. At this moment, Pablo Rosario's Influence is set on 20. That should be lower. Maybe they can swap. 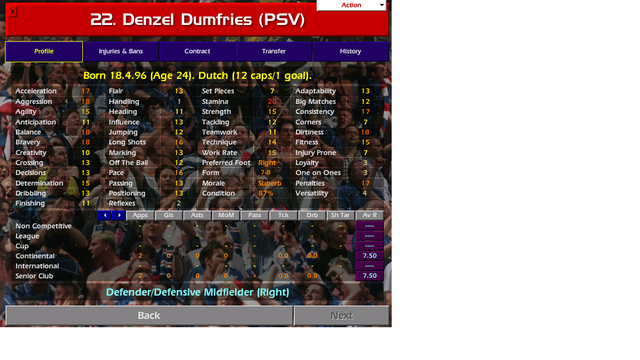 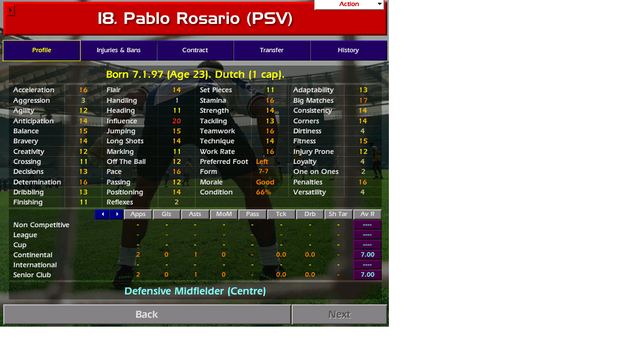 Dermotron wrote: ↑Fri Nov 27, 2020 3:32 pm Anyone planning on playing with Athletic Bilbao or Barakaldo? It would be good to get some feedback on the change to the players with Basque nationality. It should allow a career game with either club that's not next to impossible 15 years in

I sold Inaki Williams (€75m, couldn't say no) with the intention of buying him back a few years later, but I can't! He's 1st Spanish and 2nd Ghanaian - I understand why, but with him already capped by Spain irl (therefore will never do anything for Ghana) would it make more sense to have Basque as his 2nd nationality for the purposes of the game?

Edit: maybe Iker Muniain should be AMRLC? I have him on FIFA Ultimate Team and he's LW

but transfermarkt backs up the RLC claim.
Top

Indeed, he should have Basque 2nd Nat
Top

Dunno if you wanna do the same for his brother Nico? Different situation as he’s not played for Spain.
Top

He has played on the right maybe 10% of the games in his career. Until this season he has played from mainly the left, and is currently a more central. ~8-12 right side would be sufficient.
Top

He has played on the right maybe 10% of the games in his career. Until this season he has played from mainly the left, and is currently a more central. ~8-12 right side would be sufficient.

I should’ve mentioned that he’s currently AMRC, so I guess we agree.
Top

He has played on the right maybe 10% of the games in his career. Until this season he has played from mainly the left, and is currently a more central. ~8-12 right side would be sufficient.

I should’ve mentioned that he’s currently AMRC, so I guess we agree.

I think AMRLC is fine. In past 3 seasons his positions for starts are RM19, LM23, CM26 according to https://www.football-lineups.com/footba ... /Analysis/ (of the 2 FW starts one was left and one central which I've added in)
Top

Are Swansea cash rich after the US takeover?
Top

Are Swansea cash rich after the US takeover?

They were something daft like 97% wages to income in PL and have suffered since with big contracts. They have slowly sold off those players (and other young "starlets" for some good cash - Dan James, McBurnie, Rodon etc) to balance the books and they are probably only now in a position where books are relatively balanced.
Andre Ayew still on best part of 80-100k a week but he's pretty much the last one

Then they have about 28 random US actors all all with minority stakes such as Landon Donovan and Mindy Kayling. - https://www.walesonline.co.uk/sport/foo ... y-14053437

Swans Trust still owns 21% of the club but they were excluded when Huw Jenkins and others excluded them from the sale to the US guys. Swans Trust members (I'm one of them) have voted to take the ex-owners to court - taking an age to get things set up and funding etc

In Short, Swans are relatively skint and owners not chucking in any money (fans detest them and want them out) but at least the books are balanced now and nearly all big earners have gone!
Top

Scout Lars Wellm seems to be in the game twice. I have two of him with the same DOB and similar stats.
Top

Played a save with Palermo (Italy) and two things bothered me a little bit:

1) Lazio is massively overrated. I dont know if it was just this save, I should play more saves with the same database to reach a better conclusion, but in this save they are just unbeatable. I only could win the league by scoring more than 100 points, because Lazio hit the 90-100 range like 10 seasons in a row. Unbeliavable.

2) I dont know if this has more to do with the patch or the database, but my team got rich much faster than I'm used to see in my CM saves.
Top

hi, is saturnpatch v10 coming for the latest patch?
Top

Highly unlikely as Saturn has not been around for months. Just use the Nick+Co patcher.
Top
Post Reply
320 posts