The other day I had an idea of a database with lots of comic book heroes and villains from marvel, dc, other.

I imagine it to be like top trumps. As a lot of physical attributes easily crossover. Like Strength, Agility, Acceleration. etc.

With maybe tweaked commentary file, and maybe changed or reduced number of attributes if it was even possible.

Has someone attempted any kind of fantasy team database before? I was just curious if there was any out there already.

If not then its ok, I know it will be too much work to make as its an old game and it will take too much energy and time to make, I'm just sharing the idea because I thought it would be an interesting concept. Like Club X-Men vs Club Hydra. And the best teams would be Justice League/Avengers..

or maybe I will just use the in-game edit nickname for 2 teams for the fun of it as that will be easier to do. 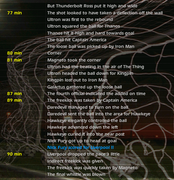 What positions you thinking? Wolverine is clearly a DM, Gambit an AM/F, Prof Xavier, Chairman, and Jubilee... Unused sub.
Top

"what did you think of the fantastic four team, Chris?"
"Well Geoff, Sue was invisible for most of the game, Johnny started brightly, but faded second half, Ben was a rock at the heart of the defence, and Reed really stretched his legs with that late run."
"Excelsior."
Top


Lol, Hawkeye crossed instead of taking the shot. That's so Hawkeye.

Just as well bullseye wasn't playing for the Villains, although I suppose Daredevil would have nullified him as usual.
Top

I find weird that Captain America is not the captain. Funny idea though
Top

Now you gave me a new idea, I'm thinking it could be expanded to other things also.

Edit. Ignore this idea. I tried it and it sucked. It only works with comicbook characters.
Top