The Hall of Fame consists of memorable topics, stories, CM 01/02 Legends, awards and members who have made a huge contribution to CM 01/02 over the years,
Post Reply
83 posts 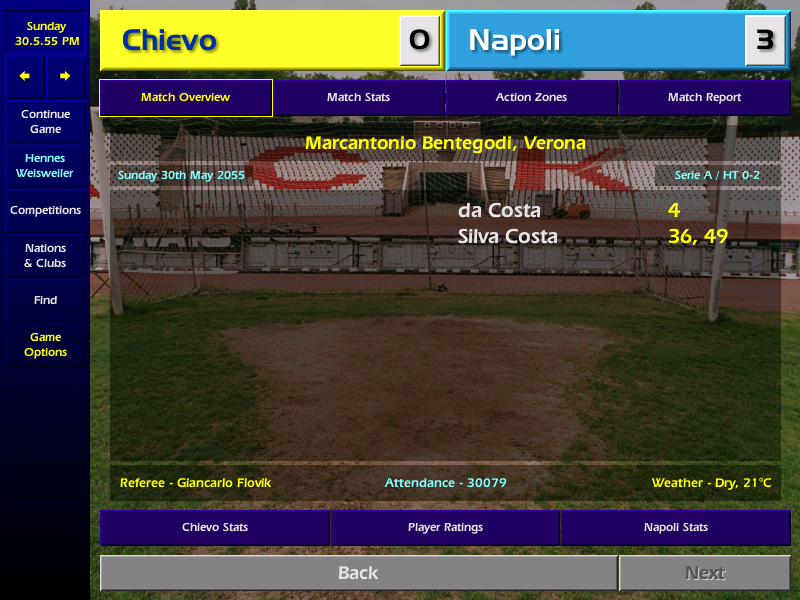 A comfortable win at Chievo on this final day of the season, means that we have defied the odds to win the Serie A title, which completes an impressive domestic double! 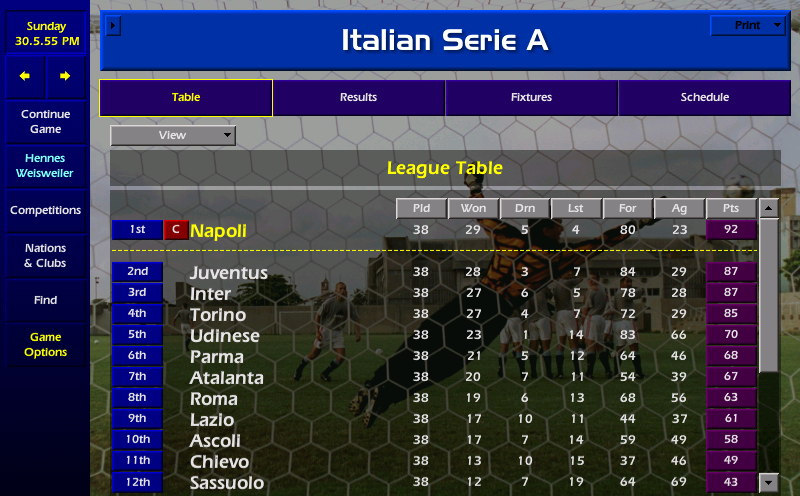 With Juventus losing 1-2 at Parma, we didn't need the win as it turned out, but the result was never in doubt.

The outstanding Andrei da Costa excelled once again in the position behind the front two, earning a 10 rating and the Man of the Match award for the second successive game. 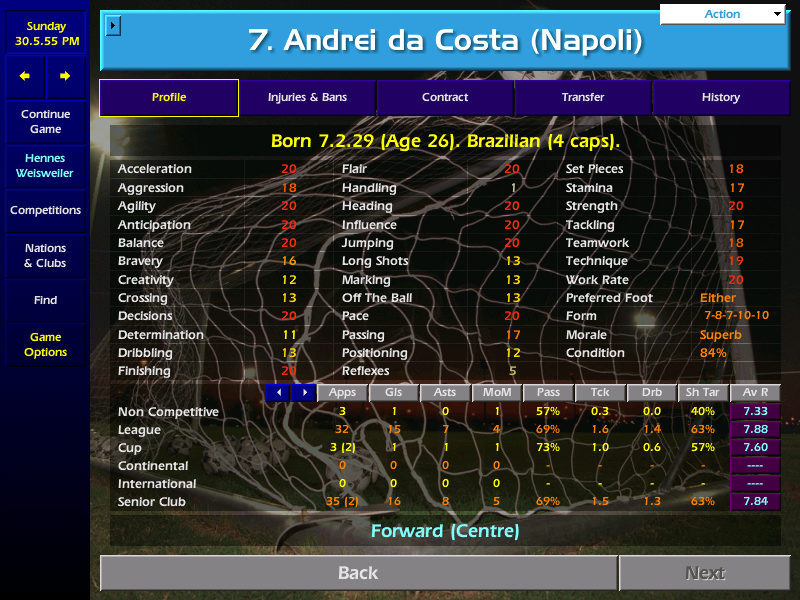 The Brazilian international got us underway in the 4th minute. He received the ball from left midfielder Javier Ríos, went past a defender, and hit a high and hard shot to send us into a 1-0 lead.

da Costa turned provider in the 36th minute, when he headed a near post cross by midfielder Christopher Steinmetz, into the path of striker Sérgio Silva Costa, who volleyed us into a 2-0 lead.

We put the game beyond our hosts in the 49th minute. da Costa headed another Steinmetz cross into the path of striker Diego Vázquez, and the Argentine international put the ball into the six yard box for Silva Costa to head us into a 3-0 lead, which completed the scoring.

Summary of the Season

At the start of the season, I made my expectations clear. I envisaged us being a lot stronger defensively, and getting to around the 90 points mark. We've done exactly that. 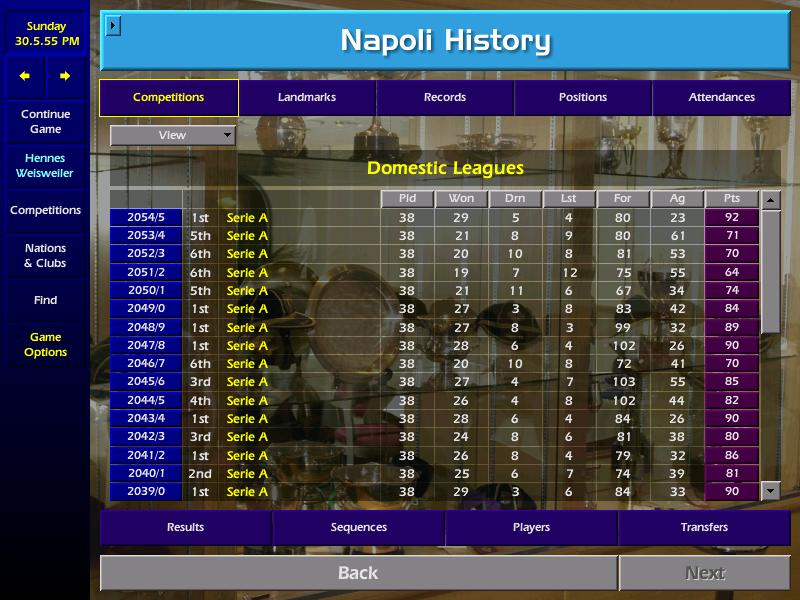 We've lost none of our goalscoring prowess, but as a defensive unit, we've become the strongest in the division. This has been a major factor in us winning the double.

It wasn't all plain sailing. We had a reasonable start to the season throughout August and September.

October was a tough month. We crashed out of the second round of the Europa League after failing to score against Belgian side Mouscron, then suffered back-to-back league defeats at Bologna, then at home to Parma.

Our home form was particularly poor. We collected just nine points from our opening seven Serie A games at the San Paolo, culminating in a wretched 0-3 defeat at home to Juventus on Matchday 12, that saw the Turin side move ten points clear of us at the top of the table.

We were in the 5th place that we'd finished in the previous season, and looking nothing like title contenders.

A change was long overdue. I messed up tactically, by persevering so long with the attacking 352 formation at home. It was working well enough on our travels - we went on to finish with a record of W15 D2 L2 of our nineteen away games, starting with that formation only throughout the season - but we needed to do something different at home.

I knew what had worked well for me in the past. I'm comfortable using the three at the back formations. We immediately switched to the 343 formation at home, and won our next four league games. I then switched to the flat 352 formation at home, and we won our final eight league games. That's twelve games after the switch, twelve wins, and just one goal conceded during that run.

Meanwhile, we continued with the attacking 352 formation away from home. Results were good, and we put together a twenty-one league match unbeaten run, that included a nine match winning sequence.

This was similar to the twenty league match unbeaten run my FC Köln side put together in our title winning campaign, which also directly followed a wretched home defeat. (0-4 to Leverkusen) That run saw us win thirteen consecutive league games.

The run that my Napoli side put together started at the end of November. We were still ten points adrift of Juventus at the beginning of February, but my Mentality Monsters kept going, and a mini slump by the Old Lady saw us close the gap to six points by the end of that month.

Juventus remained six points clear at the end of March, but April saw us win at the Allianz Stadium, before our run came to an end with a defeat at Atalanta. Juventus went into the final five games of the season, four points clear at the top of the table. The odds were against us, but my Mentality Monsters had other ideas.

Juventus lost the first of those two games, while we won our two, to leapfrog the Old Lady and go top of the table for the first time this season, with just three games remaining.

Juventus weren't giving up. They got an excellent 2-1 win at outgoing champions Inter, and followed that up with a 3-0 win over Bologna.

We showed that we could handle the pressure though, by winning both of our games, to maintain that two point gap going into the final game. We also comfortably beat a good Torino side in between those two games, to lift the Coppa Italia.

The pressure was on. Failure to win at Chievo could've handed Juventus the title, but we got the win, and the Old Lady lost, and remained the bridesmaid once again. 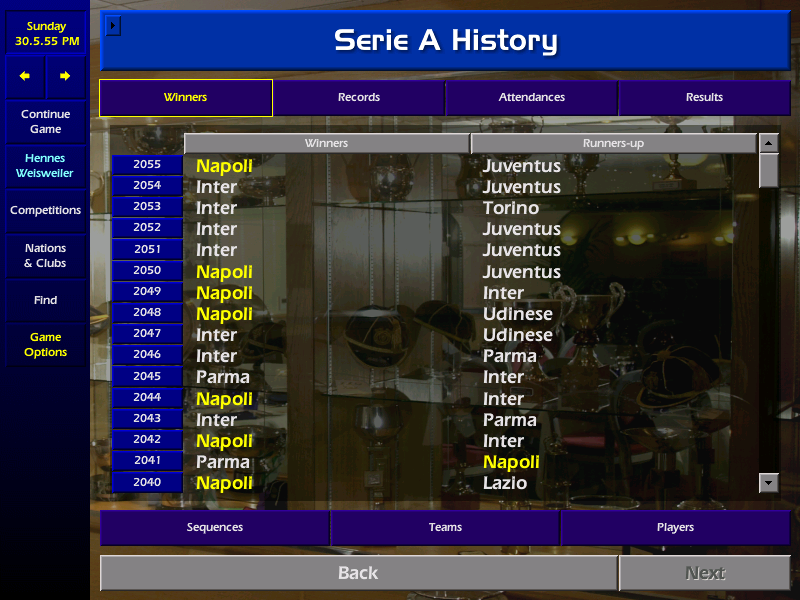 Although I give myself credit for recognising the hidden attributes required, and signing the players that helped us to become the most solid side in the division, I should point out four of our best players this season are players that I inherited. These are Marcos Ruschel, Sérgio Silva Costa, Andrei da Costa, and Diego Vázquez. 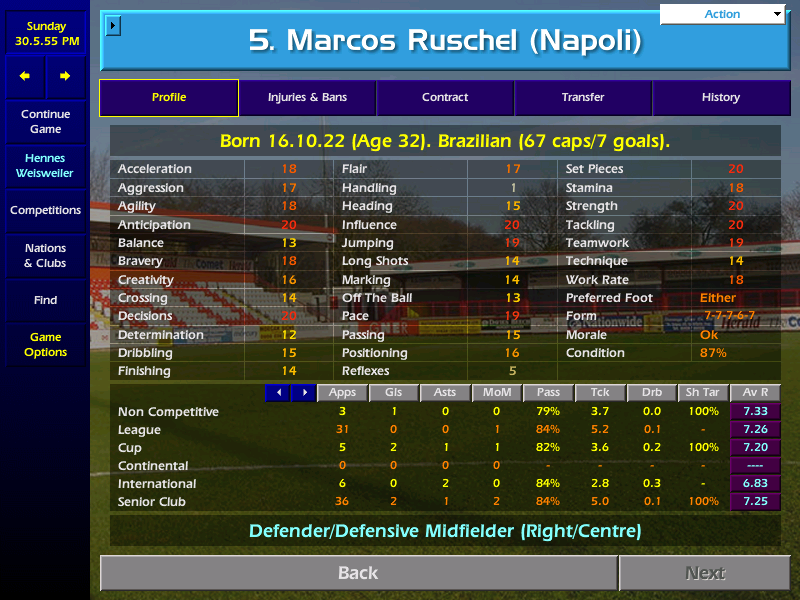 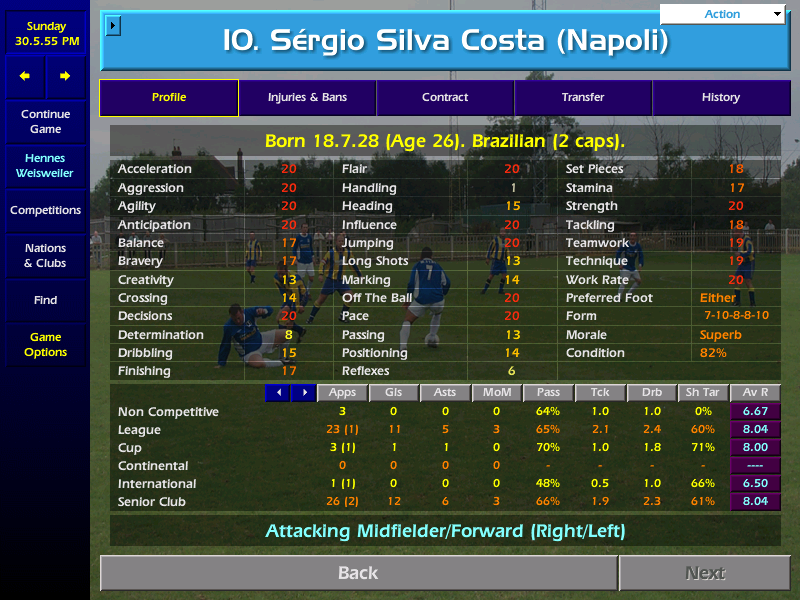 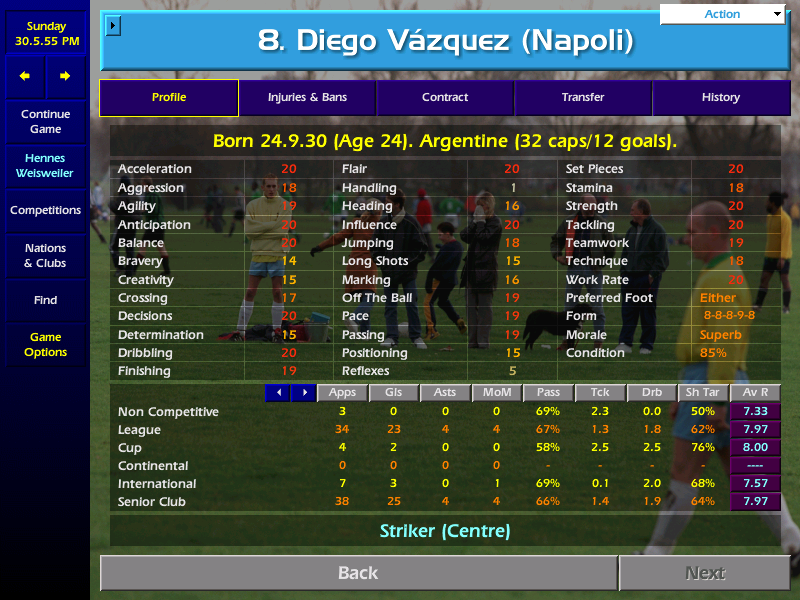 Those four players have high values for Consistency and Important Matches, but a value between just 3 and 9 for Pressure. The low value for this attribute didn't affect them at all in those final three games after we went top. If anything, da Costa was even better, picking up 10 ratings and the Man of the Match awards in our final two games.

I guess that it's possible that the combined high value of Pressure for the other seven players, meant that there was enough in the XI to see us through.

Once we sorted out our form at the San Paolo, consistency was very high. We W23 D2 L1 of our final twenty-six games at home and away.

I've also highlighted throughout the season how well midfielders Carlos Llorente and Diego Giménez have done. They have provided goals and assists, and have worked hard to protect our back three.

The best signing I made was Christopher Steinmetz in January for just £4.7M. 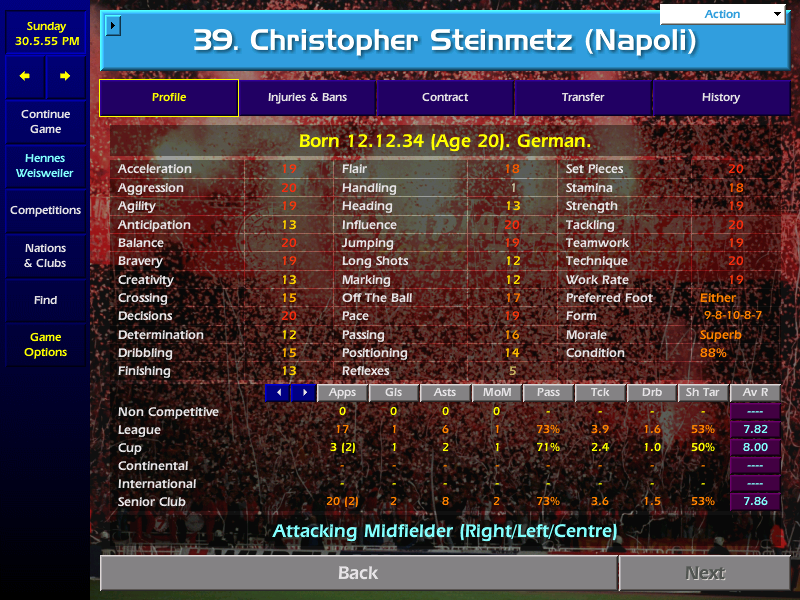 His ability to provide assists and win the ball in the centre of midfield has helped us maintain our great form throughout the second half of the season.

My former club finished the season well. They stayed unbeaten in their remaining six games, to secure 2nd place. 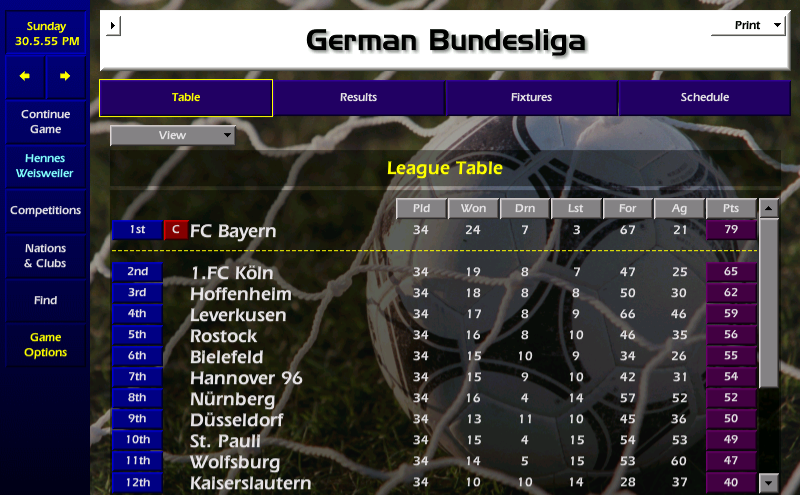 You've probably noticed that Borussia Mönchengladbach have been relegated. This comes just five years after one of my successors led them to the Bundesliga title, and fifteen years after I led them to their fourth and final Champions League title.

Back to FC Köln, and they beat Wolfsburg to lift the DFB Pokal. 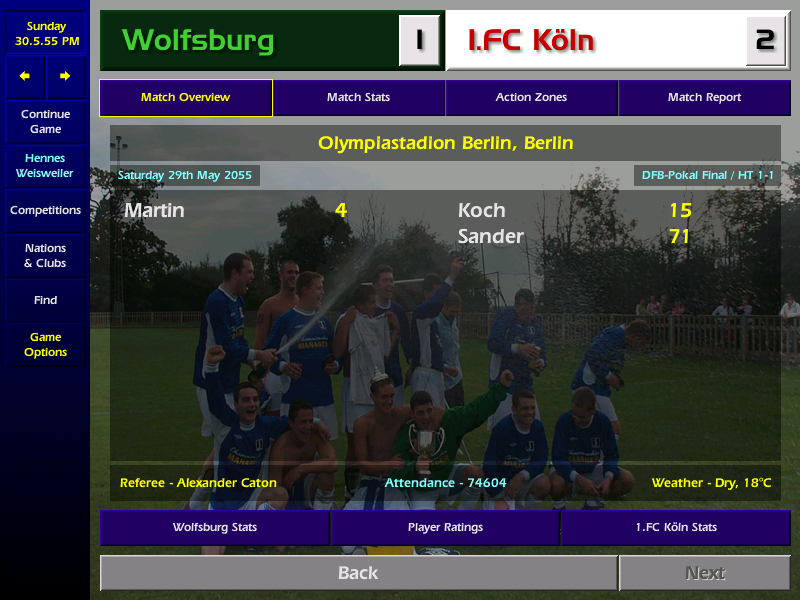 Not a bad season for them in the end, especially considering the amount of player departures they had to endure.

This is it now. This marathon 36 season save has taken me over two years to complete. Story writing has taken up a lot of this time.

Thank you for reading, and thank you for all of the encouragement and feedback. I'll have a little break from story writing now, but plan to start a new one in the autumn.
Top

Firstly can I say thank you for writing. The reading was the easy bit.

This has been something of a rollercoaster ride with many highs and lows. Quiet how you managed to go on year after year trying to get that elusive league title with Koln is beyond my comprehension. I would have given in ! That determination and resilience would have impressed Weisweiler and is a great tribute to him. Sorry to see this finally over, but I do hope that means something new is in the can.

As for the final day, no fuss, no drama. Just a very professional job. A final margin of 5 points makes it look much easier than it really was.
Top

This has been something of a rollercoaster ride with many highs and lows. Quiet how you managed to go on year after year trying to get that elusive league title with Koln is beyond my comprehension. I would have given in ! That determination and resilience would have impressed Weisweiler and is a great tribute to him. Sorry to see this finally over, but I do hope that means something new is in the can.

As for the final day, no fuss, no drama. Just a very professional job. A final margin of 5 points makes it look much easier than it really was.

Thank you for those kind words

All worked out nicely on the final day - stress free, feet up and cigar out!

League and cup double - what a way to go out

Nice finish for Koln as well!

As I've previously said, this is up there for probably one of my favourite ever stories on the site for your writing style, willingness to carry on and not give up during those Koln times. I recent enjoued your theories about what may help and putting them to the test

HALL OF FAME WORTHY for sure

I think Kingsley has said it all.

There were some rough spots in the middle at Koln where it didn't look like things would all fall into place but you stuck at it and it has been excellently written throughout.

Congrats to you and of course congrats to Napoli in the final chapter as well. Their biggest ever points haul I see despite them being Serie A winners previously. Another great achievement.


Enjoy a break. Hope to see you back with another story soon.
Top

Thanks for the comments chaps. I've got the basis for a reasonably long-term save that I'll probably start around September/October.
Top

A fantastic season with Napoli to finish off this wonderful career. Some great transfer business in the summer but it took the new recruits time to gel as a unit and yourself a while to sort out your home form. An indifferent first half of the season but your "mentality monsters" certainly justified their tag, going on a blistering run when it mattered most, while others around you couldn't handle the pressure.

Many congratulations on completing this marathon challenge and making it such delightful reading. I must apologise for not commenting up until now and I need to catch up with the rest of your exploits soon. It sounds like you endured years of frustration with Köln but your persistence paid off, so I'm particularly looking forward to that chapter. HOF worthy without doubt. Looking forward to see what you've got in mind for your next project, which hopefully I'll be following from the start.

I'm very much behind, but have caught up now on a fittingly successful final chapter to this epic.

Surprised to see MGladbach go down after you left them in such a strong financial position!

Thanks for your efforts in writing this over a long period of time. Everyone else has already said it all, but it was truly superb, for the idea, the struggle and the amazing players uncovered along the way!
Top
Moved from Stories to Hall of Fame on Wed Aug 03, 2022 9:41 am by Kingsley
Post Reply
83 posts

Return to “Hall of Fame”