The Hall of Fame consists of memorable topics, stories, CM 01/02 Legends, awards and members who have made a huge contribution to CM 01/02 over the years,
Post Reply
113 posts

He's won almost everything available to him now so I may just fast forward through a few seasons and give less frequent updates until the time comes where he stops getting games and/or retires.

Whatever he does now he's had one hell of a career so don't want to bore people with similar updates of great feats.

Seems like a plan. It will be nice to see further stats.
The Memoirs: Memoirs of a Football Manager, The First Faltering Steps, The Thinking Man's Alternative, Like a Moth Drawn to a Flame and Stopping the Yo-Yo Years
Top

Guessing it's just me but the images don't work in the season 10 update? Maybe postimg is down right now!
Top

Images are fine for me
Top

My James Henderson has finally hung up his boots. After 932 games for 19 different clubs he has started on the next phase of his career as a coach at Motherwell. They still hold his player registration, but don't list him in their squad. 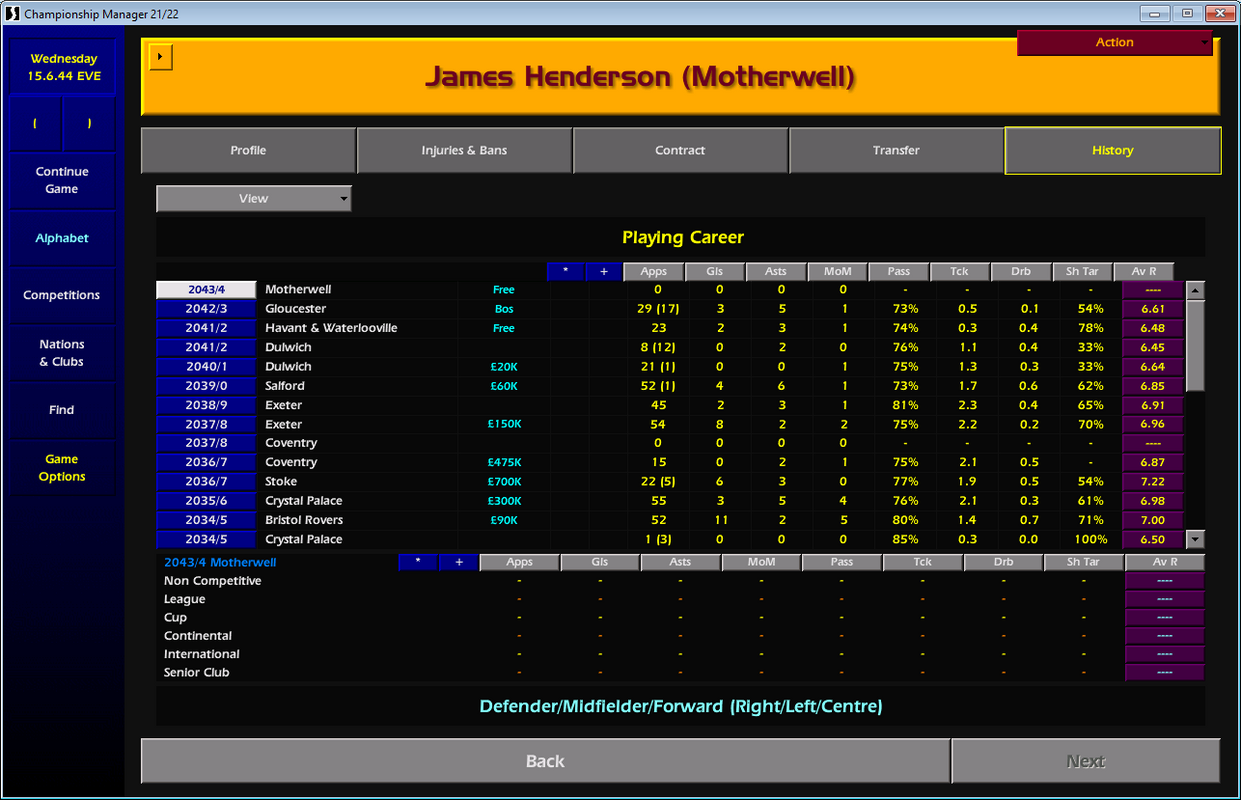 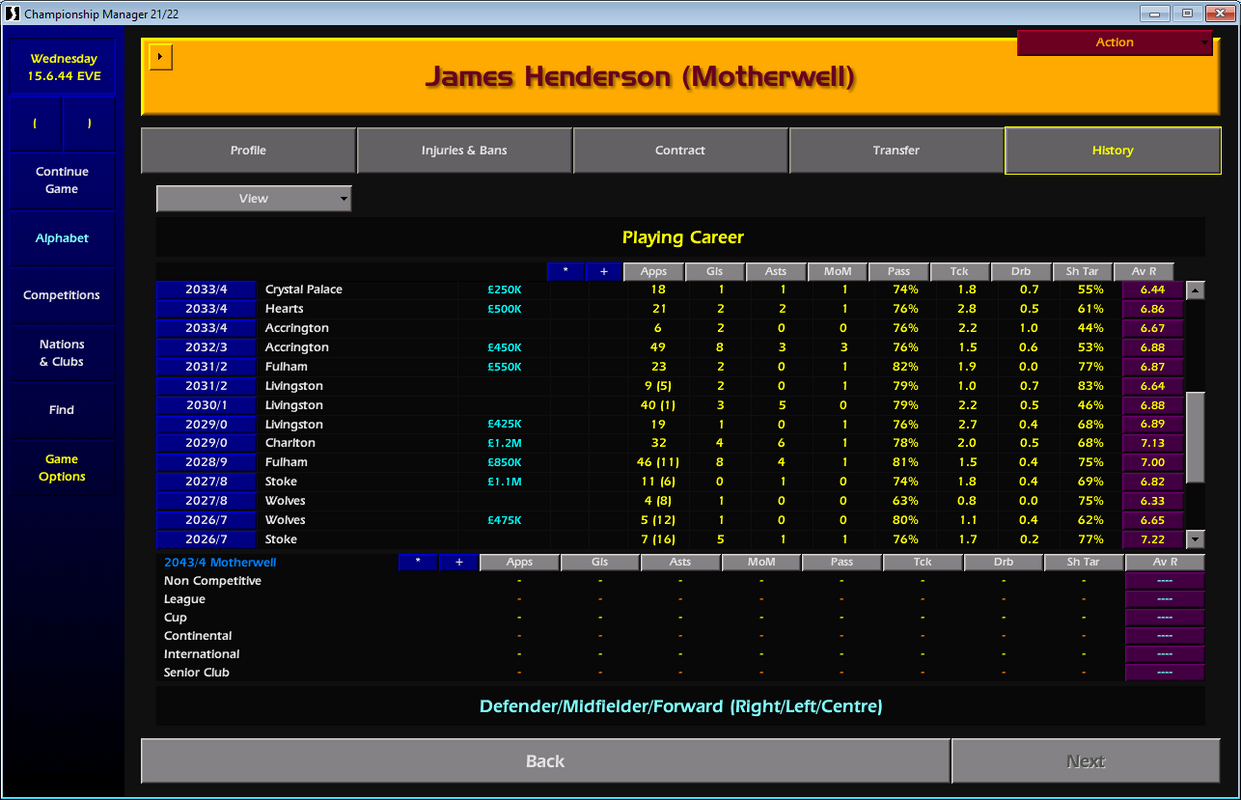 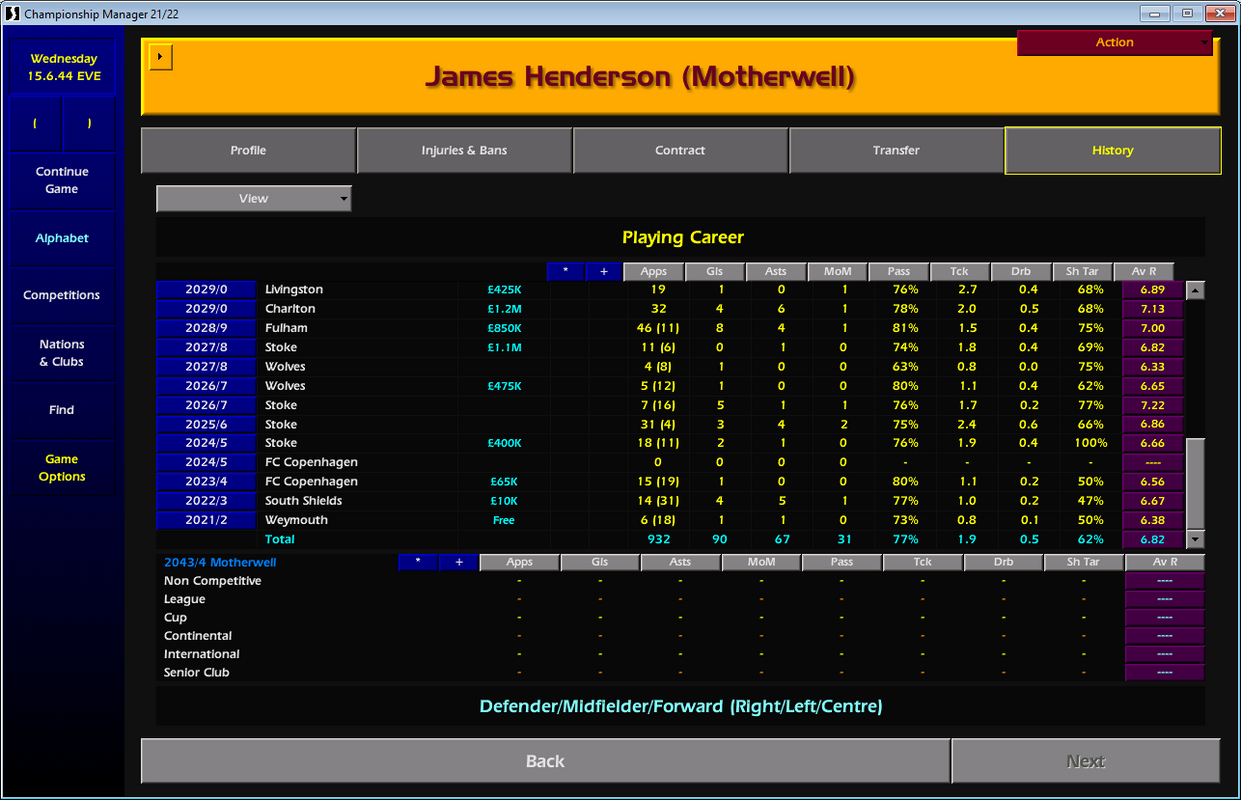 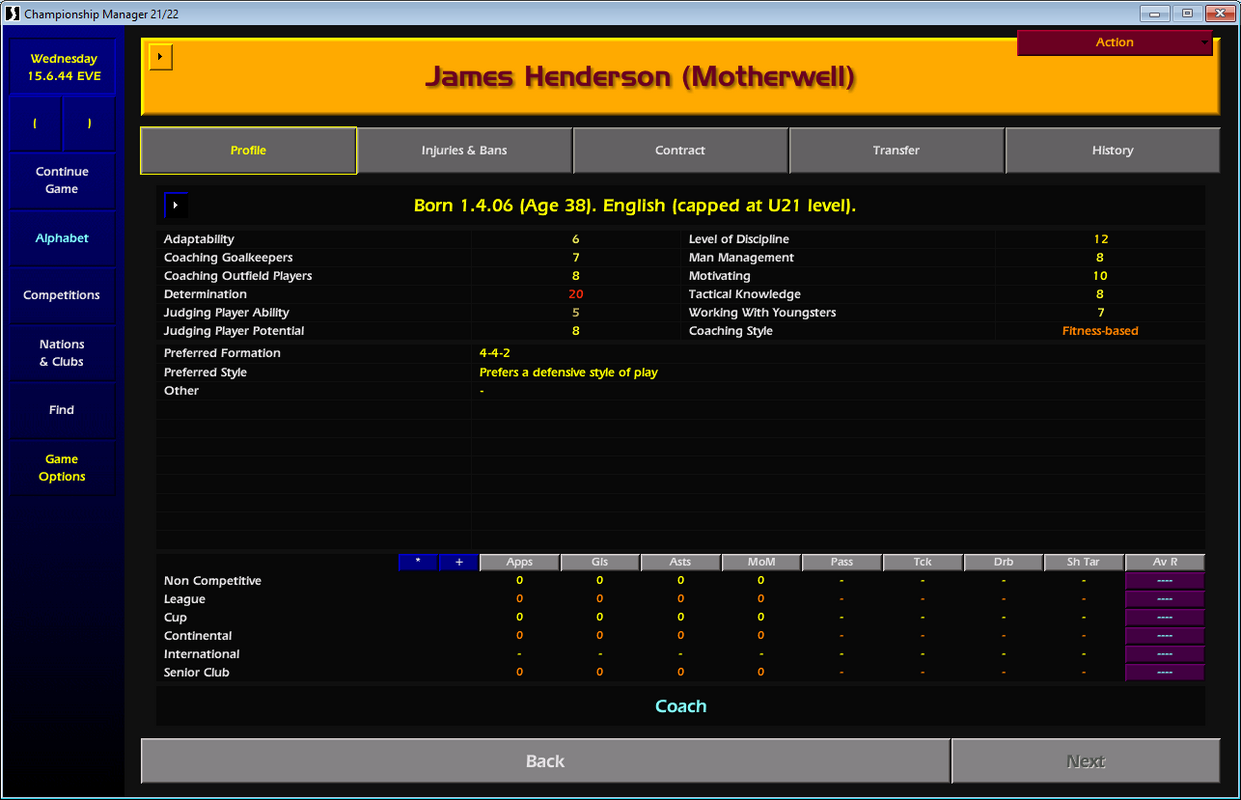 Your James Henderson is a different person altogether!

19 different clubs!
The Memoirs: Memoirs of a Football Manager, The First Faltering Steps, The Thinking Man's Alternative, Like a Moth Drawn to a Flame and Stopping the Yo-Yo Years
Top

But still managed a huge number of games.

He can get a better job, determination is key!
Top

I wrote out a whole massive post over the course of a couple of days.
I pressed submit last night and went to bed.
Said post is not here now.
Who knows what happened?!

I'm certainly not writing it out again!
So instead of full post, which included every competition Henderson had won, you get just the screenshots. 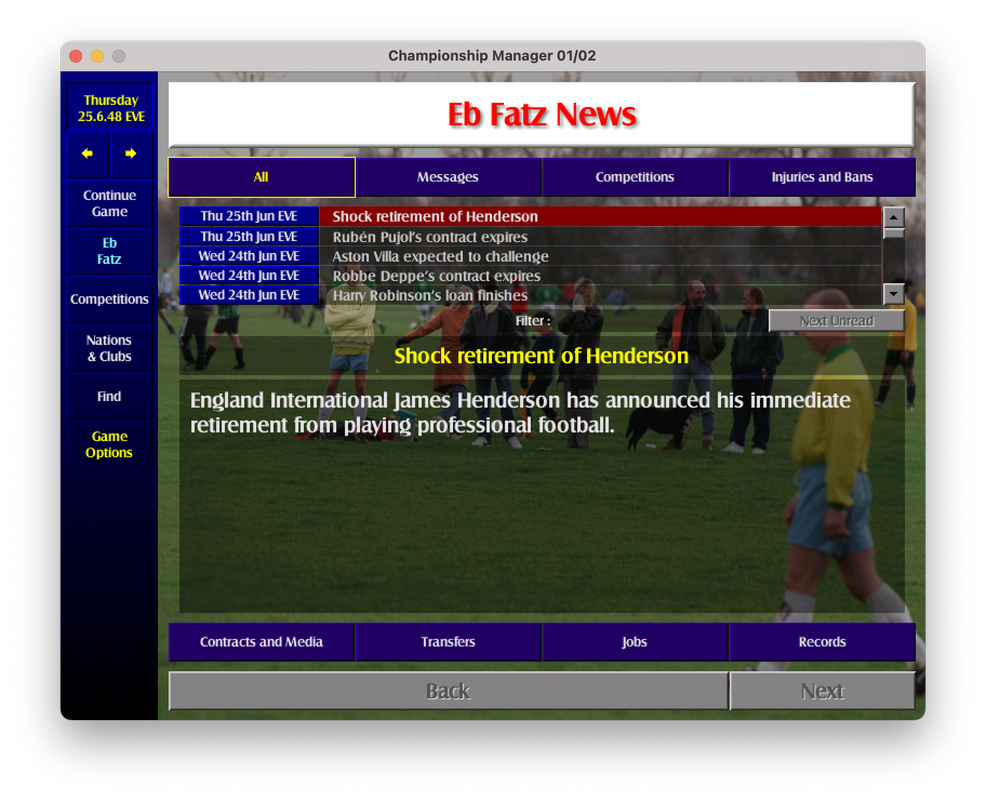 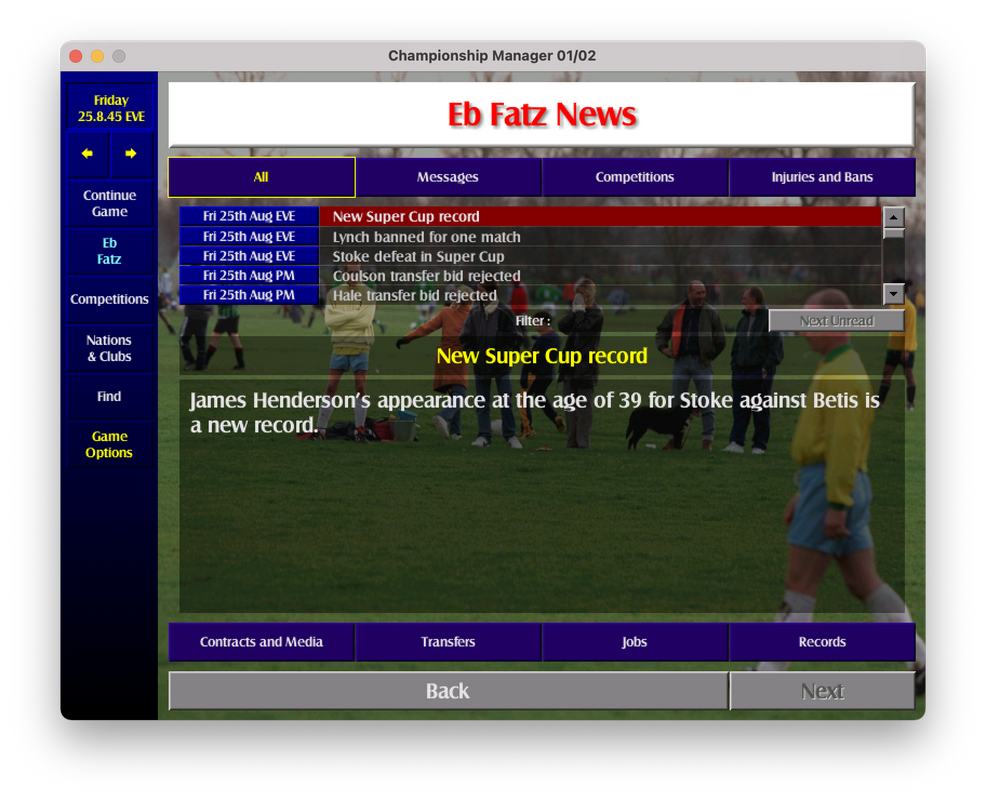 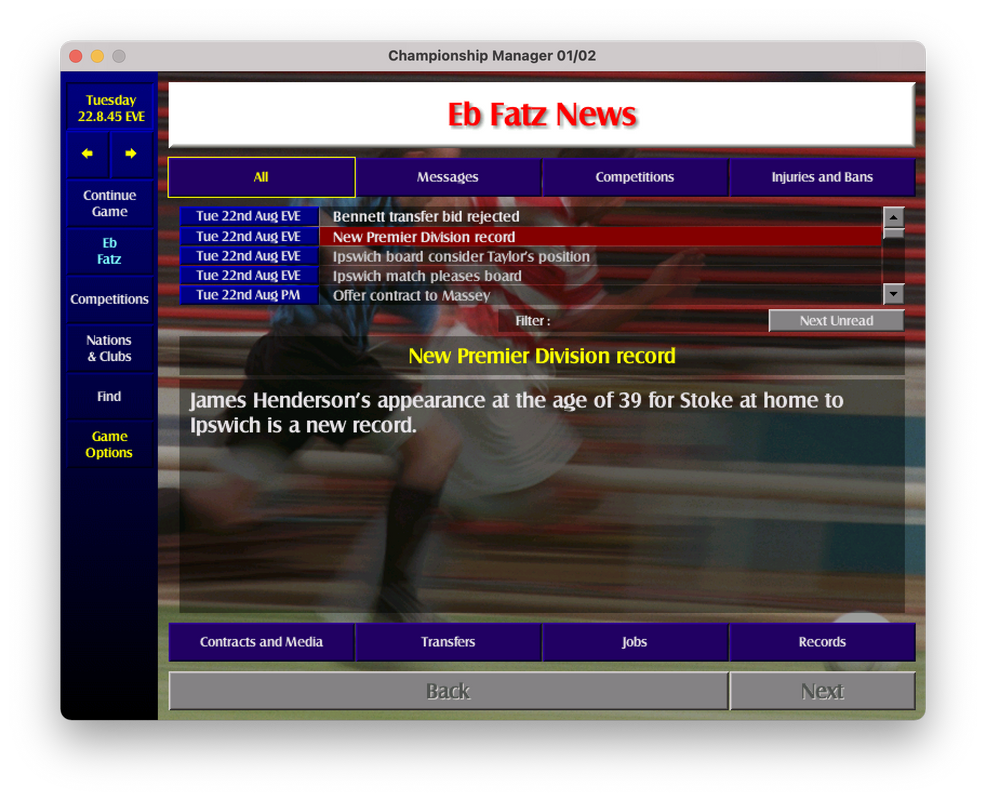 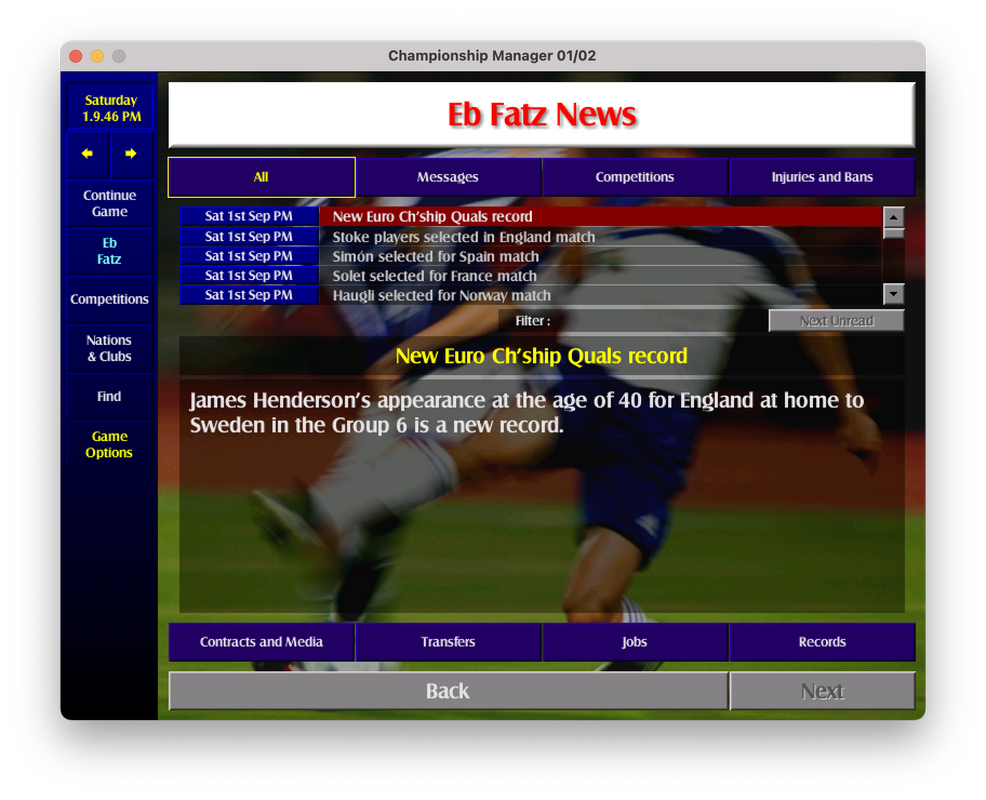 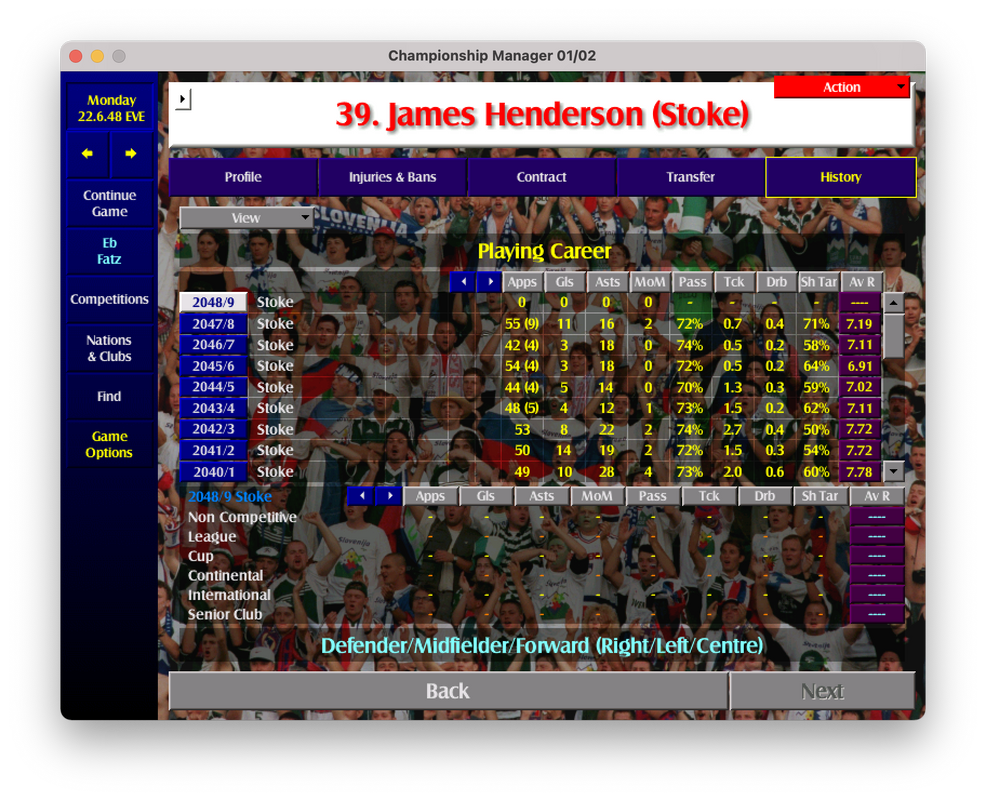 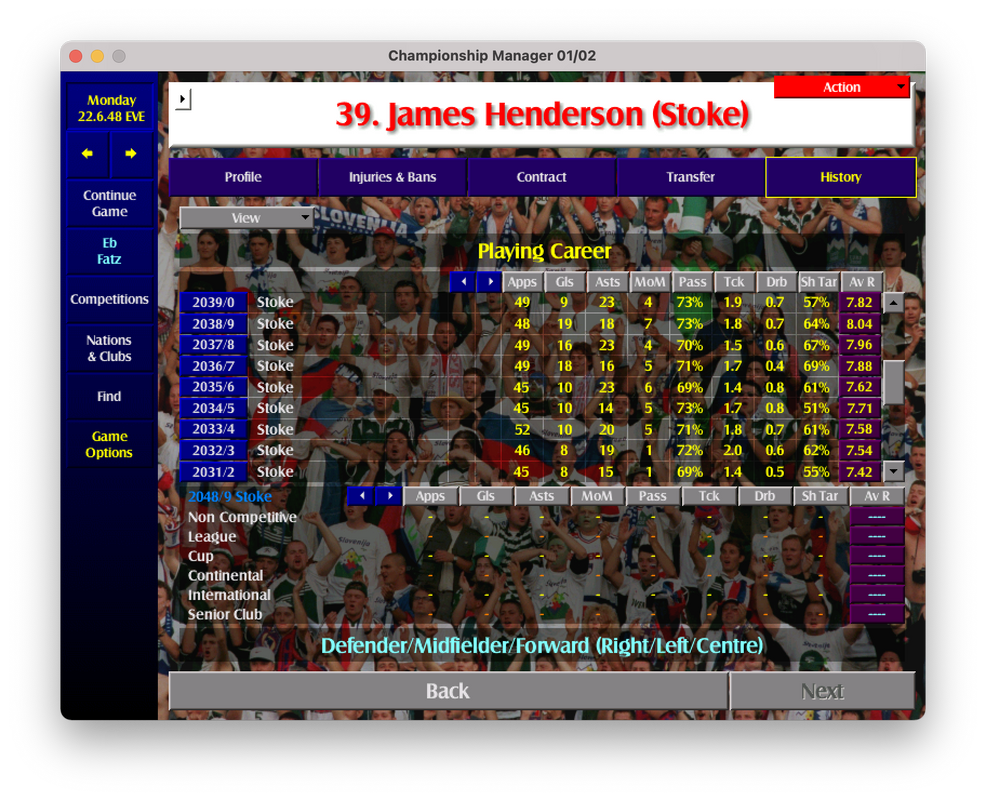 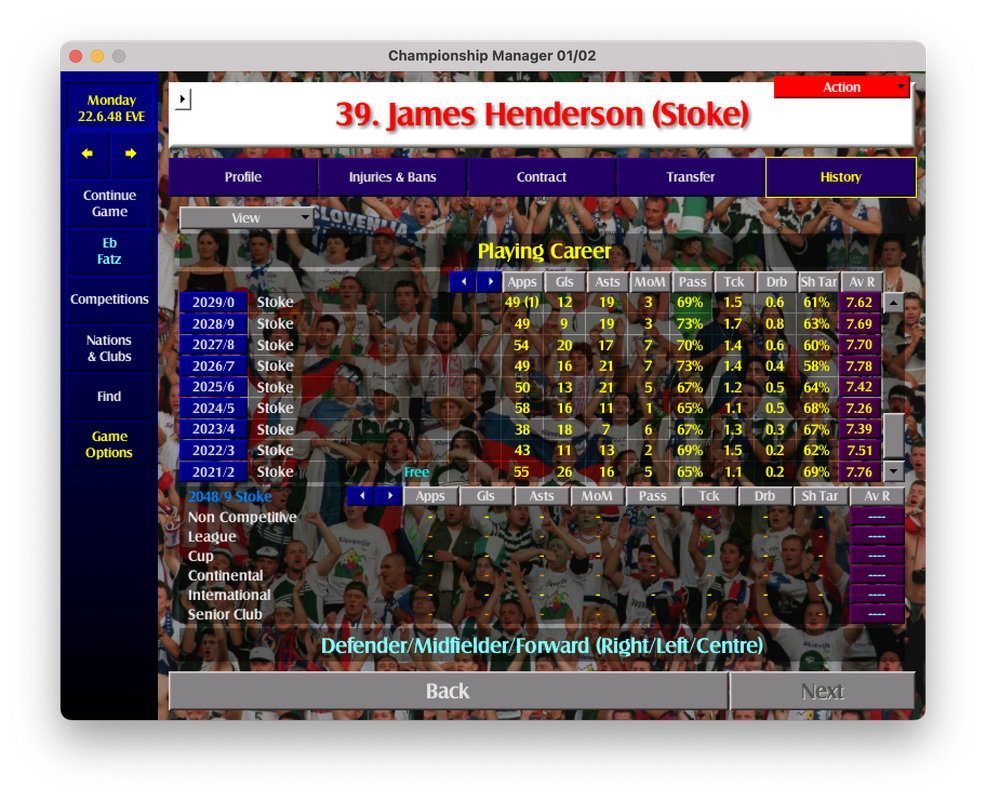 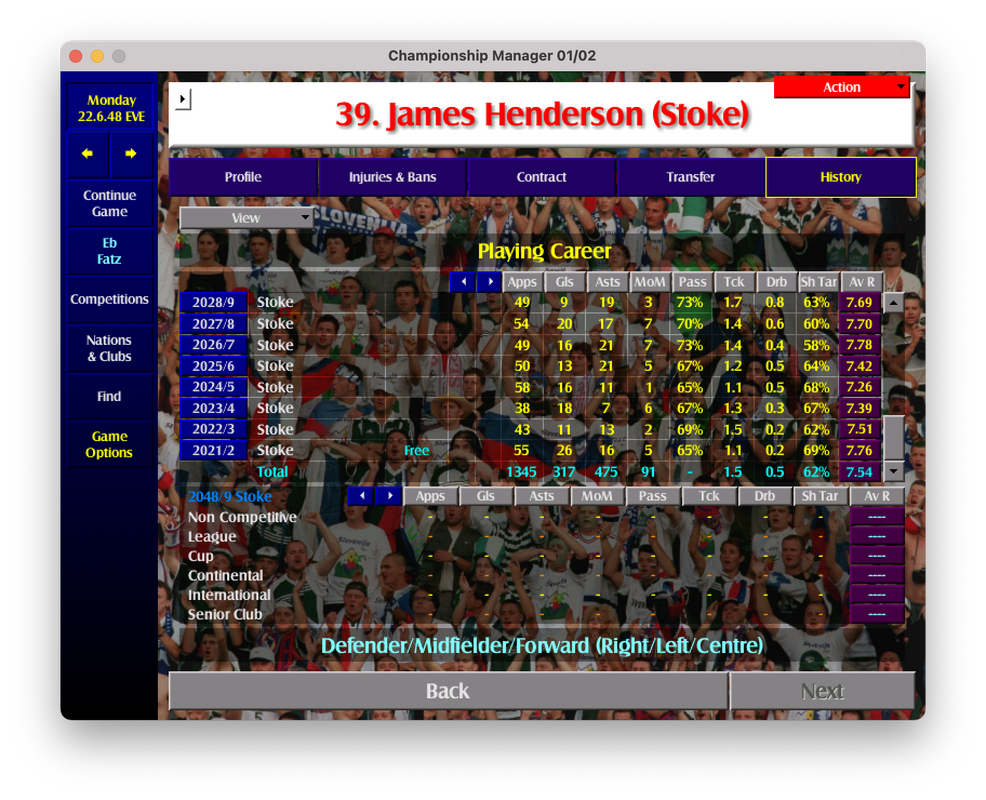 In brief, he made his debut in 2021 and retired in 2048 meaning he had a 27 year career. In that time he racked up 1,345 appearances for club plus 159 more for his country.
He may well have got more for England but the World Cup failed to complete in 2022 and was never played again.

Domestically, he won everything there was to win. Sometimes multiple times. For example, he won the Premier League TWENTY ONE times.
The Champions League, the UEFA Cup, Intercontinental Cup, World Club Cup all won as well as every domestic trophy as well. 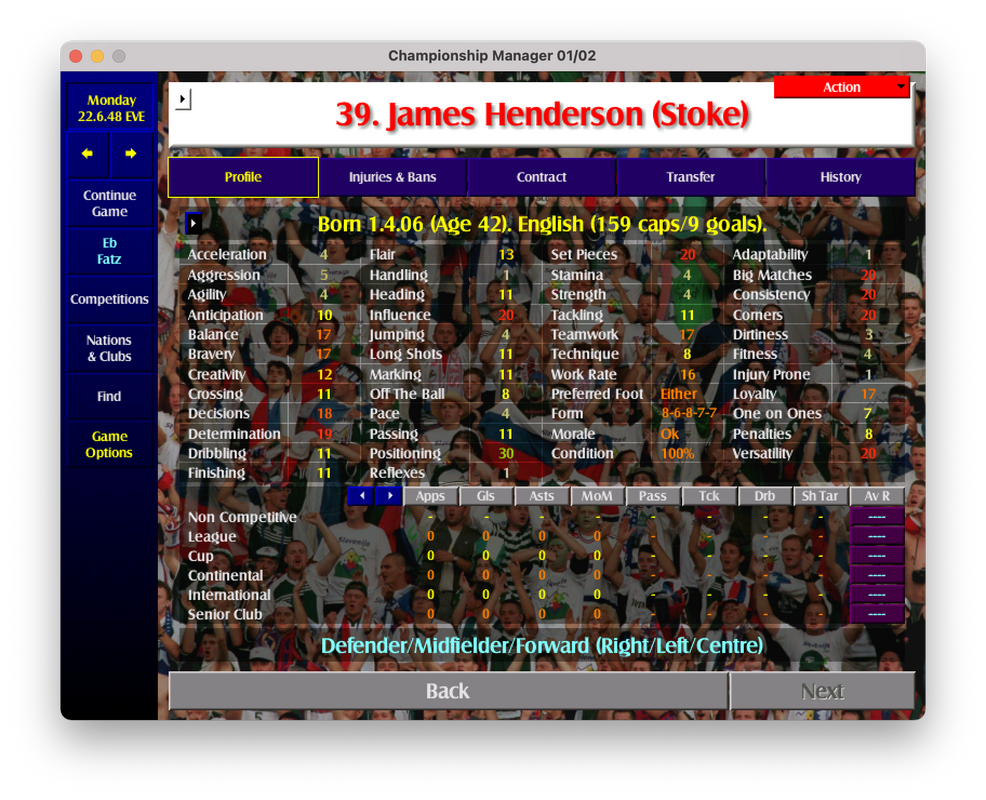 He was all but done by the time he retired. No acceleration, pace, stamina or fitness. But that said, he was 42 years old and had just competed in a Champions League final despite it being a loosing effort.

And so, what would he do now?
Would he decamp to the football pundit's studio or would he consider a career in the dugout or on the training field?


Anything you want to know. Drop me a question and I'll see if I can answer it.
Find me on Twitter, Facebook and YouTube.
Search: TheEbFatz
Top

Hang on - am I missing something

I'm sure in last updates he was mid 20's

WTF has happened for the story to end and he's 42?!

Are you saying the post that you lost contained the last 10 years of his career or something?!
Top

Wow, my boy got old all of a sudden

Amazing career though. Shame about that World Cup bug, definitely would have got more caps and maybe even win it?
Top

I'm sure in last updates he was mid 20's

WTF has happened for the story to end and he's 42?!

Are you saying the post that you lost contained the last 10 years of his career or something?!

No! I had decided after Season 10 to not do seasonal updates and just take his career through to conclusion.
That I had done and I had written out a significant post detailing all the different trophies he had won, dates and opponents that he made milestones like 50 caps, 100 caps, 150 caps and also had a comprehensive honours board that told me EVERYTHING he had won from competitions to Player of the Month awards.
I can't just look on the Stoke honours board because there were some games that the AI obviously deemed minor like Charity Shields and Intercontinental Cups as he didn't play in a lot of them.

For example, Stoke won NINE Intercontinental Cups during his time at the club but I know Henderson was only selected in one of those and that was very late in his career.
I could go back though and list everything from his individual Achievements page but I just don't have the space to check and double check. Maybe I'll just screenshot those 18 PAGES!
Find me on Twitter, Facebook and YouTube.
Search: TheEbFatz
Top

Amazing career though. Shame about that World Cup bug, definitely would have got more caps and maybe even win it?

He captained England for probably half of his caps. Interestingly normally playing as either a left centre back of a three or as a right wing back.
For club, he only ever played centre midfield or centre forward.

Unfortunately though he never won a single international honour.
Find me on Twitter, Facebook and YouTube.
Search: TheEbFatz
Top
Moved from Stories to Hall of Fame on Sun Dec 18, 2022 8:16 am by samsami
Post Reply
113 posts

Return to “Hall of Fame”